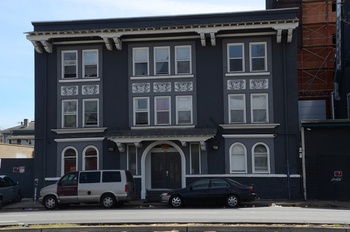 It became run down and was the target of a lawsuit from the city of Oakland to shut it down because of drug dealing and squalor. The hotel was cited for a number of code violations including broken toilets, exposed wiring, and mold infestations. 1 Ironically, in the Google Street View from January, 2014, a large banner proclaims "Now Renting / Newly Remodeled".

In 2018 the city announced plans to buy it and refurbish it as homeless transitional housing. 2 It opened later in 2018 under the name The Holland. 3

Before the 1912 renumbering and later street re-alignment, the address of the Hotel Holland was 589 - 22nd Street. An April 1907 article says C.W. Phillips had leased the 71-room hotel for 10 years. 5

The first reference by name found in the Oakland Tribune is from May 1907, an ad from Will J. Culligan Furniture Co. mentioning that they had the contract to furnish the new Hotel Holland. 4

One resident of note was comedy actor Vernon Dent, who was living there in 1910 with his mother and younger brother. 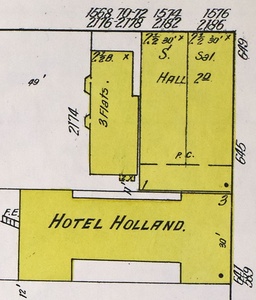