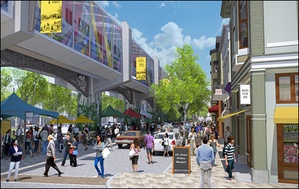 The West Oakland Specific Plan is a plan developed by the City of Oakland's Oakland Redevelopment Agency along with the firm JRDV International and community members. The plan involves future development in Oakland's West Oakland neighborhood. Work on the plan was begun in July, 2011.

At a contentious Planning Commission meeting on June 11, 2014 (that included protests), the plan was accepted by a vote of 4 to 2. It then went to City Council for approval. On July 29th, Council postponed a final vote on the plan [source], although the City's site says that the plan becomes effective Aug. 29th. 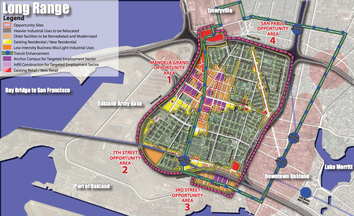 See also the the City of Oakland's webpage for the West Oakland Specific Plan.

The following workshops have been held by the city:

The City of Oakland's webpage for the West Oakland Specific Plan. 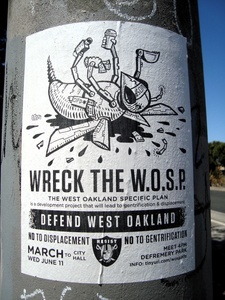 There have been a number of anti-gentrification protests relating to the WOSP.

Kilovolt Coffee was vandalized in June 2014, likely relating to it being seen as a gentrifying business.

Learn more in The Fight to Develop West Oakland" in the East Bay Express.