Although Western Canning Company is included in the list of Principal Industries of West Oakland - 1920, the company's plant was actually located in Emeryville. The first portion of the company's Emeryville facility, located on Park Boulevard between Hollis and Watts, was completed in 1918. Western Canning was organized by the Mee family, and used Chinese labor.

In 1921, the company was purchased by Virden Packing Company as part of Charles E. Virden's attempt to build a large canning empire after the post-World War I recession. The August 1921 Canning Age article on the sale noted regrets with the sale, noting a Chinese worker had written "Good-bye" in both English and Chinese on the cafeteria blackboard. By 1926, Virden Packing's canneries were being sold off. The British importer Balfour Guthrie initially placed an offer to buy the plant in 1926, but the plant was finally bought by the California Packing Company (popularly known as Del Monte) in 1927. (The purchase was actually done by the "Sterling Company," which was controlled by Del Monte.) The former Western Canning Company building, by then known as Del Monte Plant #35, operated through 1989. Western Canning's former plant was torn down in 1992. The site was sold to Pixar Animation Studios in 1996 -- and is now home to Pixar's headquarters.

The following excerpt from 1920 addresses the need for worker housing faced by Oakland companies:

"Another altruistic event connected with the industrial history of Oakland for the past year is the housing programme, conceived, inaugurated and carried to a successful conclusion by the Western Canning Company. 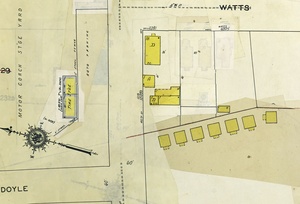 This concern, like many others, found itself confronted with the housing problem for its employees. It built twenty-two bungalows with all up-to-date conveniences, including wall beds, etc. These were built around a court with flowers and vegetation, characteristic of our California, and in addition the corporation built a central house were infants and young children were nursed and cared for, while for the older children a playground, fitted out with all modern equipment, was constructed. This good example in keeping abreast with modern thought in regard to the co-operative spirit to be displayed towards employees, cannot but bear good fruit."

These bungalows were constructed north of the main cannery buildings and just south of the intersection of Doyle and 45th Streets, as shown in this 1931 aerial photograph. The buildings do not appear on a 1946 aerial photo of the same location, although some of them are shown on the 1950 Sanborn map for the area.