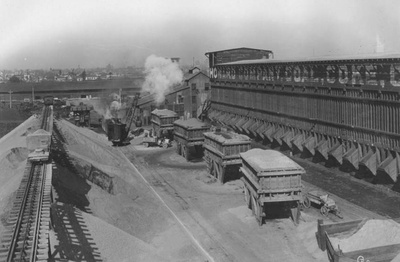 The Western Fuel Company was located at the foot of Market Street, at the Oakland Inner Harbor.

The Western Fuel Company was incorporated in San Francisco on December 12, 1902, capitalized for $1,500,000. It involved the purchase of 35,000 acres of land of the New Vancouver Coal Mining and Land Company (near Nanaimo, British Columbia); equipment of John Rosenfeld's Sons; stock and business of J. C. Wilson & Co.; and the stock and business of the Howard Company of Oakland and San Francisco. The officers of the company were John L. Howard, president; James B. Smith, vice president; and D. C. Norcoss, secretary. 3

After the Western Fuel Company decided to expand, they chose Oakland as the site of the new plant. In 1916, $250,000 was spent on the expansion, then a year later an additional expansion was completed with the construction of a wharf and warehouse at the cost of $75,000.