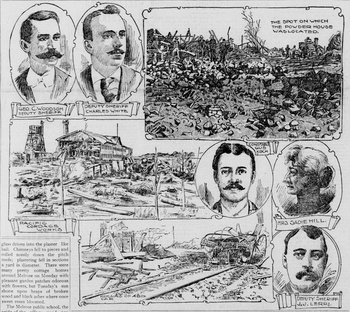 victims and scenes of damage 1

At 5:18 am on July 19th, 1898, the Western Fuse and Explosives Factory exploded, destroying and damaging numerous buildings in what was then the town of Melrose, and killing 7 people. The explosion was so large, people in San Jose thought it was an earthquake, 1 but the tragedy all started with the purchase of a 25¢ lottery ticket.

The Oakland Tribune headline read "Six Blown to Eternity", and their coverage took 2.5 pages (of only 8 pages total in the paper.) 9

Nearby businesses and houses were destroyed or badly damaged, with windows blown in as far away as 200 yards. "Small dwellings were razed and what was left of their timbers was consumed by the whirlwind of flame that burst forth with the explosion." 1 Damaged buildings included the Pacific Cordage Works and the Melrose School. The complete list of damaged buildings was extensive. 2

Dong Ng Chang had purchased a lottery ticket from a local shopkeeper, Quong Tan. He got the idea that he'd won $100 (or $48; either way, a lot of money at the time), but Tan assured him he had not. According to the San Francisco Call, Chang grew increasingly angry, and on July 18th, attacked Tan with a hatchet then shot him in the stomach with a bulldog pistol. Another article in the Call says Chang thought Tan owed him 10¢. 3

Chang lived in a cottage but 20 yards from the powder magazine at the fuse factory where he worked. Likely realizing he'd be hanged for murder, Chang holed up in the powder magazine which he managed as part of his work. The area was sealed off by the deputies.

At one point, Chang asked for a drink of water. Deputy Will Moffitt suggested lacing it with morphine, but was overruled by Deputy Charles White.

About 5 o'clock in the morning, the deputies send a message to Chang, telling him he wouldn't be hurt if he surrendered. He agreed, and came out. Some of the deputies approached, and when they were almost to him, he ran back inside and sealed the door. A short time later the magazine exploded, leaving nothing of Chang and little of the deputies who had approached. 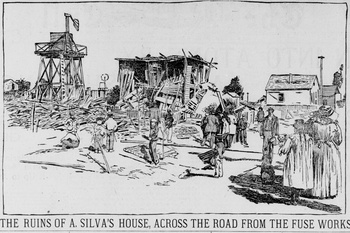 The prisoners from the Alameda County jail sent a note of sympathy to the wife of Charles White. 4

Arrangements were made to have a large public funeral for the victims of the explosion. 8

Immediately calls went up to block the rebuilding of the factory, saying it was too close to homes. There were also questions about how just many explosives were on hand. People were understandably upset, as many had lost everything they owned. 6 The local citizens organized, and sent a resolution to the Alameda County supervisors. 5

A group called the Melrose Protective Association was formed, with Nusbaumer and Reed as attorneys, with the intent of filing a test case. 7

In November, the first lawsuit of what was likely to be many came to trial. The San Francisco Theological Seminary had owned a two-story house and barn on Clark Street which was destroyed in the explosion. Their attorneys, Williamson and Livingston Jenks, charged Western Fuse and Explosive Company with negligence, and asked for $5,000 in damages. 7

Following the Kleebauer case, which was decided in the plaintiff's favor, Western Fuse counter-sued the other litigants to delay actions until the Supreme Court ruled on the Kleebauer case. It appears that was overturned, 11,12 but that didn't stop other cases. A superior court calendar from 1911 lists 13 individual cases against Western Fuse and Explosives Company. 10 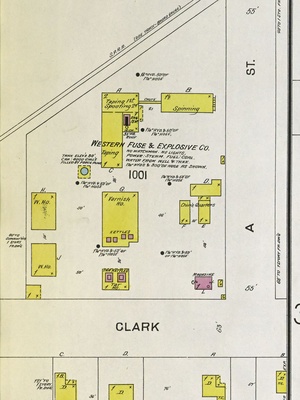