The WP was neither the first nor the most important railroad to serve Oakland.  Arguably the most important was the Southern Pacific (originally the Central Pacific), the first transcontinental railroad, which began service to Oakland in 1869.  The Santa Fe reached Oakland in 1904.  However, the Western Pacific’s arrival into Oakland was eagerly anticipated, both because of what it meant for the City’s control of the waterfront, and because of the additional competition for the SP.  Local papers published numerous newspaper articles in 1909 and 1910 covering WP’s plans for freight and passenger service.

Literally thousands of people were reported to have welcomed the first WP passenger train to Oakland at 4:15 pm on August 22, 1910.  The City suspended business for the day, and schools throughout the county were closed early.  Then-Mayor Frank Mott described the train’s arrival as “one of the foremost events of our history.”  Completion of the railroad stimulated much of the early 20th century industrial development in what is now known as the Historic Waterfront Warehouse District. 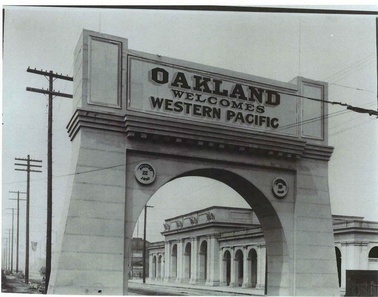 The arch welcoming the Western Pacific Railroad to Oakland in 1910 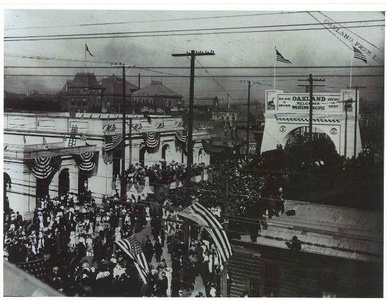 Part of the celebration welcoming the WP 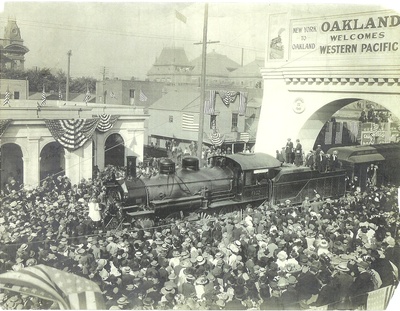 The Depot continued in use for passenger service for many years.  One of the most famous trains to use the Depot was the California Zephyr, a joint venture between the WP and two other railroads which ran between Oakland and Chicago beginning in 1949.  However, due to competition from automobiles and jets, and the fact that it took 2.5 days to travel the entire route, the train eventually became a money loser for the WP.  The WP began requesting permission to discontinue the CZ in 1966.  Finally, in February of 1970, the Interstate Commerce Commission gave WP the right to discontinue CZ service.  The last eastbound CZ left Oakland on March 21, 1970, and the last westbound train left Chicago on March 22.  (The California Zephyr name was later revived by Amtrak, but the route now ends at the Amtrak station in Emeryville.) 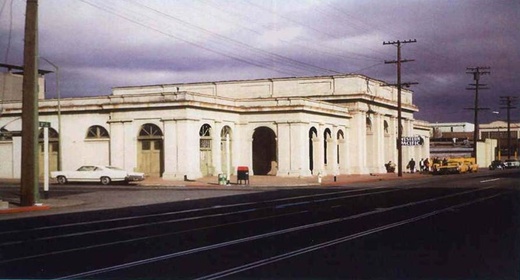 The Depot was closed soon thereafter, fell into disrepair, and was put on the market.  A local restaurateur and entrepreneur named Richard Lee purchased the Depot in 1972.  While Mr. Lee figured out what to do with the building, Oakland established the Landmarks Preservation Advisory Board.  In 1974, Mr. Lee submitted an application for a demolition permit for the building, stating that he intended to build an office building in its place.  Using interim powers under the landmarks ordinance, the Planning Director put the permit on hold for 60 days.

At the first meeting of the Board on June 13, 1974, the Board recommended that the Depot be designated as a City landmark, and on July 9, 1974, the City Council adopted an ordinance designating the Depot as the first official Oakland Landmark, under Zoning Case #LM 74-176.  The Depot was officially dedicated as a landmark on November 4, 1975. 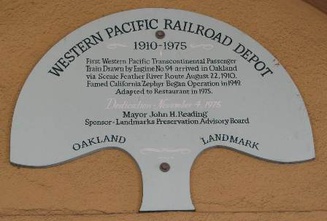 For some time, the old Depot housed a restaurant known as the Spaghetti Depot. From the late 1980s to the early 1990s, the Depot space housed Koncepts Cultural Gallery, a music venue.  The building was then used for many years as office space, with a restaurant finally coming back early this year.  The casual observer might not have any concept of the building’s importance.  This is not a building that became a landmark because of its design, or because of its connection to a famous architect.  In fact, there is some dispute as to who was the architect for the building – the building permit lists W.H. Mohr, while other documentation states that the building was designed by the D.H. Burnham Co.  It is also worth noting that the building was constructed of concrete, which was coated with rough stucco.

The first photo below shows the arcade along the front of the building, including the former ticket booth, which is now part of the office space. If you look closely in the next photo, you’ll see where the word “Oakland” is inscribed on the frieze; similarly, the word “Baggage” is inscribed on the baggage wing shown in the following photo. 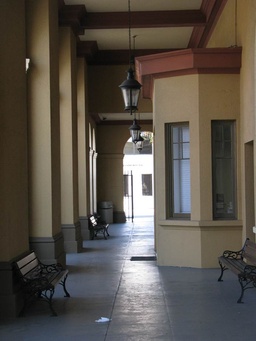 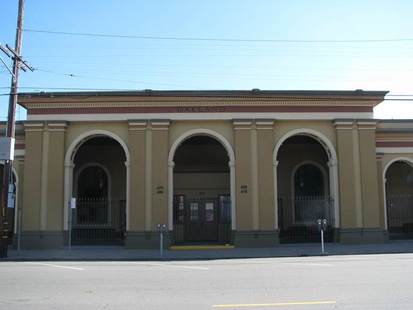 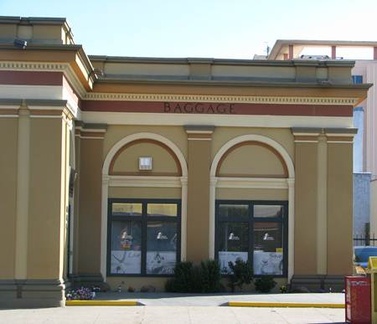 The Baggage Wing, to the south of the main building
photo courtesy NAParish