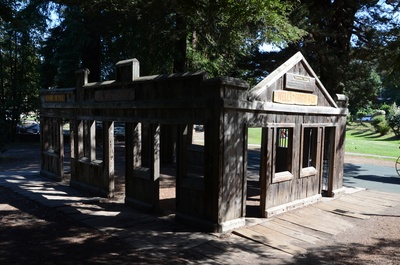 The "Western Town" Play Area is a play structure and stagecoach with a "wild west" theme in Montclair Park.

According to a post on the Oakland History group, it was originally at the Arroyo Viejo Recreation Center and may have intended to be portable. But there's debate about whether it was moved to Montclair or a new one was built in Montclair. Historic photos of the Arroyo Viejo one look different (covered sidewalks, etc.) but it's hard to tell.

The one in Montclair appeared in the late 1950s (one source says 1958) or early 1960s and has been there ever since. A sign on the structure says it was restored in 1996, with funding provided by Pacific Union Residential Brokerage, Wells Fargo & Co., Piedmont-Montclair Rotary, and Mel Copeland, a local realtor. 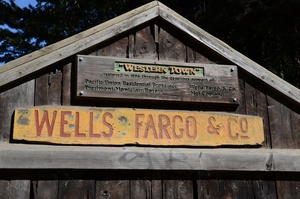