What the heck is that … 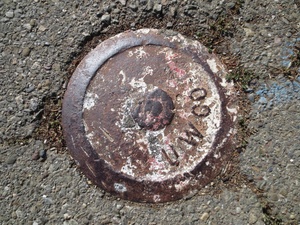 UW Co. CC SA-BY Our Oakland
Water historians know People's Water Company, Contra Costa Water Company, East Bay Water Company, and the Oakland Water Company. Was 'UW Co.' yet another of the many predecessors of East Bay MUD, or was it the foundry that made the cover, or what? There are still a few covers from People's and the others about, so it could have been there a long time.

This was spotted on Colton Blvd. in Montclair.

This would be the Union Water Company, which operated in the 1900-oughts. They are very uncommon. - ala 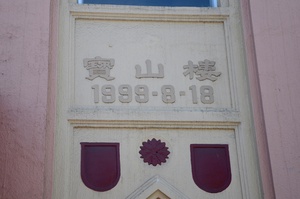 CC SA-BY Our Oakland
The building at 303 10th Street in Chinatown has 1999-8-18 and some Chinese characters above the main doorway. The building appears to be a lot older than that (guessing 20s or 30s). The only thing I could find about the date was that it was the date that "The Amazing Criswell" predicted the world would end in his 1968 book.

Interesting. Title records say this building (identified as 307 10th Street) was built in 1925, matching your guess, and the current owner (Susan Lam, widow of Woon Lam, who apparently died on January 3, 2009) has owned it since December of 1994. Note that some late 20s directories say that the Philadelphia Temple (Pentecostal) was at 307 10th Street, but the 1912-1951 Sanborn map just shows stores at the ground floor, and photo engraving on the second floor. 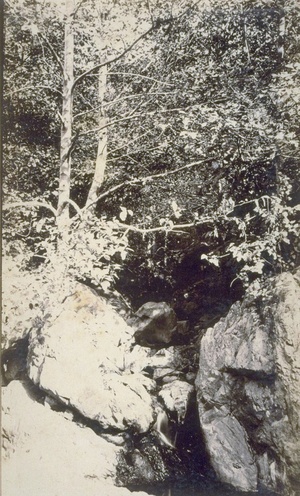 Found this antique photo, and the only information is "At Morse's Canyon, East Oakland" but can find nothing on a Google search, or on Oakland Wiki.  Does anyone know where this was and what is currently there?

This is probably the reach of Shepard Creek just above Scout Road, where Morse's ranch used to be. The huge boulders are familiar. It could also, by the same logic, be the lower end of Cobbledick Creek, but I haven't poked around there and the area is totally transformed since the 1800s. - ala 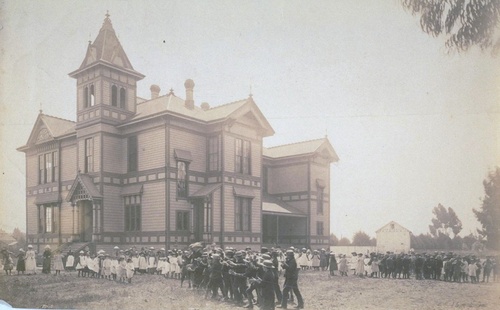 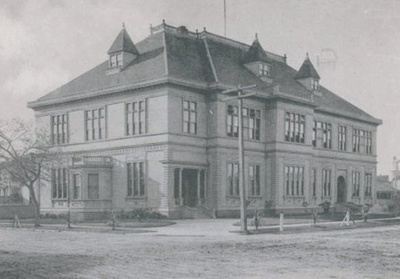 Name and address of this Oakland building from 1892?When I originally asked about this building in the photo above, it was in the context of believing it to be an old Oakland High School from 1892. However, NAParish makes an excellent point, that perhaps the photo, which was included in an entire series of Oakland photos from back in 1892, had simply been mislabeled. So the new question is, does anyone know what this building was and where was it located?

there is a vacant building that looks a restaurant- similar to the dim sum place at the emeryville marina- right before the estuary channel park in jack london square. anyone know what this is?

Where/What is the Jewel Box Area? I've seen a a few articles making reference to this term.

Art or random (or something else) on MLK?

There are some bottle caps (maybe?) that appear to be pressed into the tar on the West side of MLK just south of 40th? Anyone know what the story is? 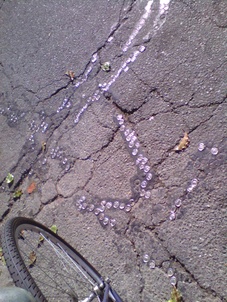 Infrastructure building on 2nd and MLK?

It has pampas grass growing on the west side of it. The roots of the grass are pushing through the plastic paint, and the paint is molding into the shape of the roots underneath!

It's across the street from what looks like a PG&E electrical substation and other PG&E equipment, so it may be a PG&E building?

Answer --> It used to be a PG&E Building.  This is PG&E's former Oakland Power Plant, which burns oil to generate up to 165 MW (megawatts) of electricity. The address is 50 Martin Luther King Jr. Way, formerly 50 Grove Street. The plant was originally constructed in 1888, and was purchased by PG&E in 1905.

The plant was sold to Dynegy in 1998, and is listed on their site as Dynegy's Oakland Energy Facility. It is used to provide electricity only during peak demand periods, but I do not know how often it is used. The site was found to be contaminated with hazardous materials, including lead, polynuclear aromatic hydrocarbons, diesel, motor oil and cyanide, and cleanup of the facility started in 2003. In late 2013, PG&E conducted an intensive 4-month cleanup of the site, as described here.

Amplification: This may have been a Great Western Power Co. facility. - ala 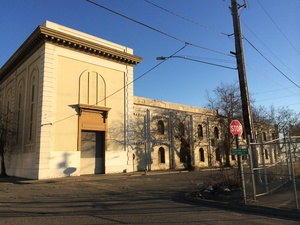 I've seen that building on Fruitvale, but I don't know what is is. I started a page on another AT&T building in Temescal, and encourage you to start pages for the others. - Gene

It's at 17th and Franklin and appears to have no doors on the ground level (that I could see). It also doesn't have windows for big stretches of the building. Anyone know what this is?

It's an AT&T building, likely full of telephone equipment and computers. See the entry above this one. - Gene 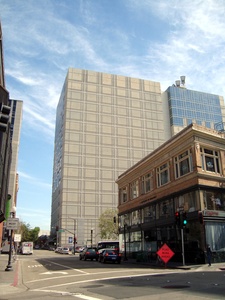