White Log Tavern restaurants (or White Log Coffee Shops) were a west coast chain of 24-hour restaurants in the 1930s and 1940s. Each restaurant was designed to look a small cabin, even if that meant putting a house-shaped façade onto a larger building.

Bemis designed custom china for the restaurants, which was manufactured the Technical Porcelain Company (TEPCO) of El Cerrito. 2,3,4 He also invented and patented a number of systems for use in the restaurants.

The 24 hour schedule seems to have made them attractive targets for robbers. 5,6,7,8 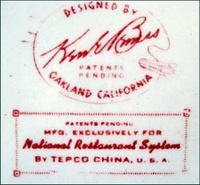 Ruth Lovell Maxwell (Bemis). While living in Minnesota, they had two children, Kenneth William ("Bill") Bemis and (Edith) Beverly Bemis (Bilyeu). Bill and Beverly were a noted dance team from an early age, performing under a variety of names. 11,13 They were also in two films, "College Rhythm" (1934), and "Rooftops of Manhattan" (1935), a short musical film. 12 They were also in some episodes of Broadway Brevities in 1937 and 1938.

In 1939, the Bemises were listed as living at the Athens Club. 9 They don't appear to have lived in Oakland long (the 1940 census lists an address in Los Angeles), but Ken's WWII draft card in 1942 gives 1431 Grove St. in Oakland as his mailing address, so he probably was in Oakland frequently.