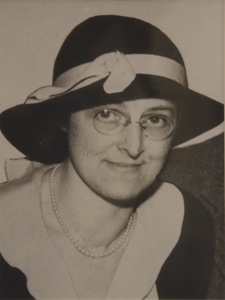 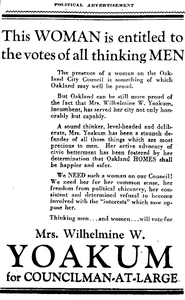 When she ran as an incumbent in 1933, she was the only woman amongst 45 candidates. A profile of Mrs. Yoakum in the Oakland Tribune noted that she had managed to both raise her three children and serve on the City Council at the same time. 4 Mrs. Yoakum was defeated by Walter F. Jacobsen in that election, receiving 22,584 votes to Mr. Jacobsen's 24,101 votes.5 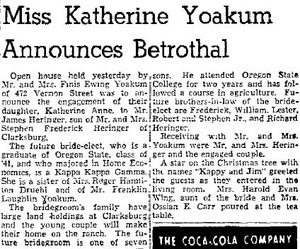 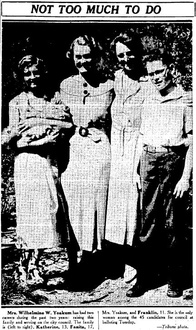 From 4/16/33 Oakland Tribune 4Mrs. Yoakum, a native of New Jersey, met her husband, Finis E. Yoakum, Jr., while they were both students at Cornell University. Mr. Yoakum was originally from California, and they returned to California after they graduated from Cornell. 6 He was later a consulting engineer. According to the Oakland Tribune, he died in a small plane crash in Brazil in 1958 and was buried near the site of the crash 7 - note that the article refers to him as Frederick E. Yoakum, despite the fact that directories and numerous other sources give his first name as Finis. Note also that online geneology sources like this one say that Finis Yoakum died in 1960. Regardless, Mr. & Mrs. Yoakum lived at 472 Vernon Street.

Mrs. Yoakum had a Masters degree in language studies from UC Berkeley, and served for 22 years as the Executive Director of the International Institute of Oakland, and also was a prominent member of the League of Women Voters and its predecessor, the Oakland Forum. When she retired from the International Institute in 1962, in addition to her three children, she also had 12 grandchildren, and one great-grandchild.6

Note: The Yoakum name has been in Oakland at least as far back as 1887, when Mrs J J Yoakum took Mr J J Yoakum to court for spousal abuse. 8 Although Yoakum is an uncommon name, there is no apparent connection between J J Yoakum and Finis/Frederick Yoakum. Note also that Finis' father, Finis E. Yoakum, Sr., who moved to Los Angeles in 1895, is famous in his own right. 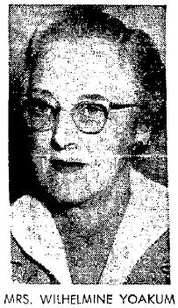