This page is about three separate individuals all named William Corlett: William H., son William G., and grandson William. All three were architects, but William G. Corlett was the best known in Oakland.

William Henry Corlett (1856 – October 7, 1937), also known as William H. Corlett and W. H. Corlett, was an American architect and contractor active in Napa County, California and the surrounding area. A number of his works are listed on the National Register of Historic Places.

William Greenfield Corlett (1887-1954), also known as Will G. Corlett, was William H. Corlett's son. Will was also a prominent architect in the Bay Area, who partnered with Walter D. Reed as part of Reed and Corlett. That firm designed a number of buildings in Oakland. 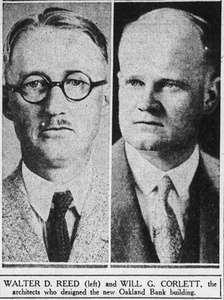 William Corlett (1918-2000) (no middle name), also known as Bill Corlett, was the son of William Greenfield Corlett and grandson of William Henry Corlett. He graduated with a bachelor's degree in Architecture from UC Berkeley, and briefly worked at his father's architectural firm before striking out on his own after the war. He was a prominent international architect who specialized in designing international schools and event destinations. He was also a California watercolor artist and wood sculpture, including kinetic sculptures. 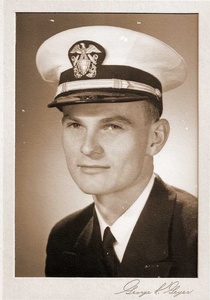 He joined the Navy and left for Honolulu, Hawaii, on May 28, arriving on June 3, 1941 and worked with the U.S. Engineers (Army Corps of Engineers) in Honolulu, survived the bombing at Pearl Harbor on 7 December 1941, became a captain in the Navy, and fought in Guam and the Pacific theatre.

After the war he joined his father William Greenfield Corlett's architectural firm Reed and Corlett. He then served a short stint as a designer in another firm before founding Corlett and Spackman in San Francisco, California, in 1952.

By then Corlett had purchased land on an unbuildable lot of the Berkeley hills, according to Alan Michelson, and invented a new way to sink metal bars into the earth so he could be a first of its kind home in California earthquake country. The three-story house had a panoramic view of the Bay Area, and numerous additions were made over time. It was the site of many family events. He and his wife lived in it for the rest of their lives, raising their two daughters in it. More information about Corlett's house is available on Pacific Coast Architecture Database (PCAD) which was created in 2002 by Michelson when he worked as Architecture and Design Librarian at UCLA. Michelson is now Head of the Built Environments Library at the University of Washington in Seattle. PCAD includes a range of information on the buildings and architects of California, Oregon and Washington. 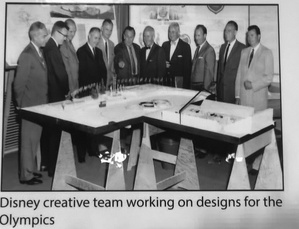 He rose to distinction for his work with Walk Disney designing the 1960 Winter Olympic facilities at Squaw Valley, as well as numerous technologically sophisticated projects for the Department of Defense, and educational facilities for all levels of instruction. When Wendel Spackman retired, Peter Skaer joined the firm.

For many years he was a trustee for Alta Bates Hospital and a board member of Goodwill of the East Bay.

As a sculptor, he was well-known to the family as the creator of the annual Easter Bunny cake, which he carved into a three-dimensional bunny. He also played the flute, and led the annual McElrath grandchildren Christmas Carol band, or as he liked to call it, the SIMP-PHONY band.

"Blue and Gold to the core, Bill’s pride for UC Berkeley showed in every aspect of his life. Holding season tickets for 50 years and never missing a game, Bill was an avid supporter of Cal football. Corlett was a board member for the California Alumni Association as well as a member of the Big C society. He also was an accomplished artist, and many people know his beautiful watercolors of the Berkeley campus, which were reproduced as a series of cards and prints and are on display in the lobby of the Alumni House.

An architect by profession, Bill designed more than 200 schools in California, Japan, Greece, and Bangladesh, as well as medical offices, libraries and housing. He was a Fellow of the American Institute of Architects, and planned the buildings for the 1960 Winter Olympics in Squaw Valley.

He was an active member of the community as Trustee of Alta Bates Hospital, President of the Berkeley Breakfast Club, and board member of Goodwill Industries.

Despite all his other commitments, Bill always made Phi Gamma Delta a priority in his life. Serving on the House Corporation for multiple decades, Bill served as a mentor, and more importantly, a great friend to many of the current House Corp members. Always thinking with the fraternity’s best interest in mind, Bill took the lead on several projects that helped sustain the grandeur of the chapter house that all Fijis have come to know and respect. Perhaps his most notable accomplishment, Bill was instrumental in securing 2395 Piedmont Ave. as a Berkeley Historical Landmark, thus ensuring that all future Fijis would be able to share his pride for Delta Xi.

Bill is survived by his wife Mary, daughters Cameron and Amanda, and three grandchildren."