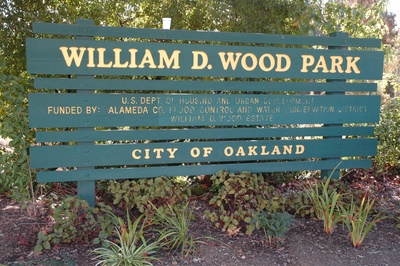 sign for William D. Wood Park
photo from Our Oakland

William D. Wood Park is a park located at 2920 McKillop Road in the Reservoir Hill / Sausal Creek neighborhood. Sausal Creek runs along its east side.

This park is a hidden gem, though still a bit of a diamond in the rough. It’s located on a dead-end street where Sheffield and E. 29th Street meet, and you wouldn’t really think to go there. The neighbors clearly take great care of it. A sign says that gardening takes place at “Wood Park” the 3rd Saturday of every month from 9-noon, under the guidance of 2012 Mother of the Year winner Lisa Lemus.

Most city parks are planned. This one, however, was not. It just happened, after decades of land movements destabilized the hillside. Major slumps occurred between 1935 and 1952, sending a large section of McKillop Road (formerly a loop, now two dead ends) downhill toward Sausal Creek despite repeated efforts by the city to halt the damage. The Army Corps of Engineers drove piles to try to stabilize what remained of the hillside, but it was too late for a dozen or so homes. Because not enough hillside remained on which to safely rebuild, the affected area was turned into a park and dedicated in September, 1976. The park was created with contributions from the William D. Wood estate and Ogawa Nursery.

A portion of the middle section of this park was owned by Levi Stevens in the late 1800s, according to the 1877 map available at the Old Oakland map site.

The landslides in the area have continued on the park's downstream side. In 2006 at least two more houses faced demolition (one collapsed all by itself) after they began to slide further. The Jehovah’s Witness Meeting Hall on the corner also remains abandoned after it was declared unsafe during the last bout of slide activity. Several lawsuits were combined into a jury trial in 2012, which found against the plaintiffs. Nevertheless the sliding remains a sore spot for many neighbors on that street (and behind/below it). 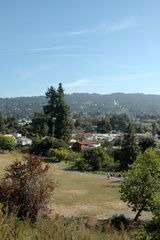 Wood Park
photo from Our Oakland 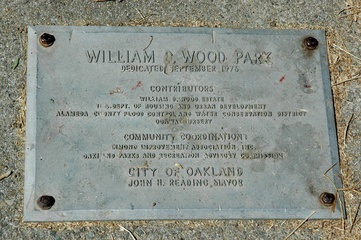 dedication plaque
photo from Our Oakland 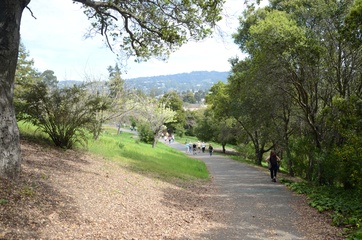 360 view of the park by greenkozi 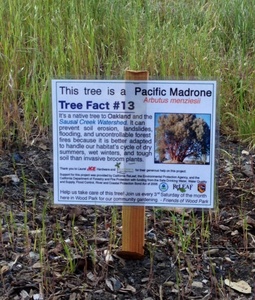 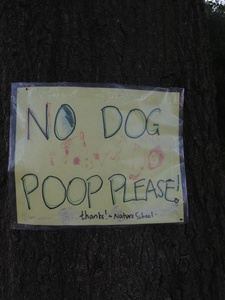 de facto dog park users tell us that group of neighbors make sure dog poop is cleaned. photo by greenkozi 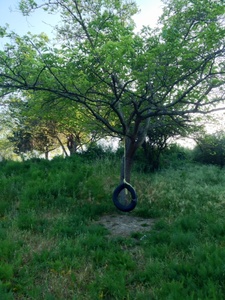 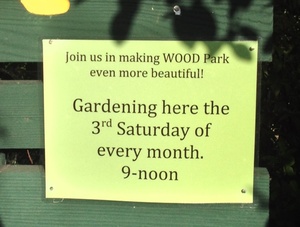