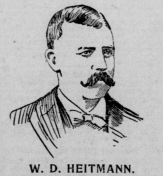 As President of City Council 2

Heitmann's 1895 election was contested as he ran for one of the At-Large seats and JM Bassett, the man who got the next-most number of votes lived in the same ward as Heitmann. 3

In 1896, there was a proposed tax rate ordinance of $1.14.  Not surprisingly, the issue at hand was water rates. The tax levy would provide money for the dredging of Lake Merritt which had become a "cesspool" and for the reclamation of the marsh between the 8th Street bridge and the 12th Street dam. 7 The item came before Council on September 24th, but Heitmann was absent that day. It passed 7-3, but his vote would determine if it went forward or not. 5 It appears that in 1898 discussion on the ordinance was still under discussion, and that the rate was being negotiated between $1.21 and $1.37. 6 Because the issue was unsettled for so long, some of the council members met in secret (no Sunshine Ordinance then). The ordinance, by this time known as "Heitmann's tax levy," finally passed on October 4th, 1898 with a rate of $1.21 and establishing $80,000 for the improvement of the lake and $30,000 for the extension of the "east side sewer."

The ordinance passed 6-4. The tax was apportioned like this:

Heitmann was one of the councilmen arrested in 1895.