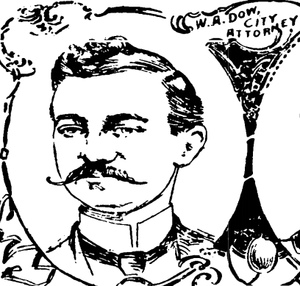 He did, however, serve as City Attorney. While he was serving, he frequently butted heads with then-Mayor Snow. For example, he supported future Chief of Police Petersen, who was an appointee of Snow's. The Police Commissioner at the time was not keen on Petersen, so Dow played nice with Snow to keep Petersen in the game.5 The rows Dow fought were frequent and reminiscent of current City Council affairs: in an article regarding a dispute over an $80 contract, the San Francisco Chronicle says that "as usual" Dow found himself fighting the Mayor and City Engineer- this time Thomas and Clement respectively.9

While a Councilman, Dow proposed a $5 yearly fee on all telegraph and telephone poles as a source of revenue.7 He also proposed that the railroads remove gates from local trains, allowing free local travel: no fares were charged between stations. The railroad companies objected, of course. It appears the ordinance passed.8

Dow was one of the City Councilmen arrested in 1895. 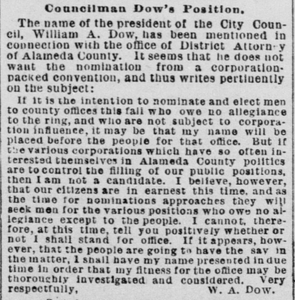 Position on running for DA4