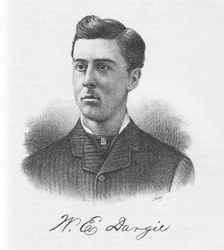 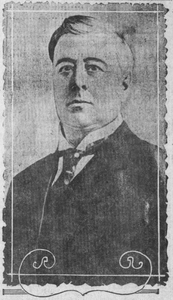 William Edward Dargie (March 13, 1854 – February 10, 1911) owned and published the Oakland Tribune from 1876–1911. He was instrumental in instilling and propagating the firmly right-wing, conservative Republican ideology with which Oakland became thoroughly identified, almost from its incorporation through the 1960s. He remained active in the running of “his” paper until his health began to fail in 1910.

William married Herminia Peralta (March 22, 1863 – December 9, 1929), daughter of Miguel Peralta (a grandson of Luis Peralta), on December 15, 1881 at the Peralta’s home in San Leandro. (Note that in many English-language publications of the time, general non-English unfamiliarity often resulted in Spanish names like “Herminia” being spelt as Italian (“Erminia”)—if not outright mangled.)

In 1902, Herminia and her sister-in-law Anne were in a carriage collision. Herminia was thrown from the carriage and briefly lost consciousness, while Anne brought the horse to a stop. 3 Anne taught in the Oakland Public Schools for several years. 7

The Dargie family lived on East Twelfth and Lakeshore (Lake Blvd.) next to Lake Merritt. [still trying to find exact location –Gene]. c. 1889, there was reference to a mansion on Jackson Street.

Dargie worked as a typesetter and journeyman printer for the San Francisco Bulletin, then later as a reporter in the editorial department. With his salary from the paper, he attended the University of California beginning in 1875. With a loan from A.K.P. Harmon, Dargie purchased the controlling interest in the Oakland Tribune at the age of 22 on July 24, 1876, after only one year of school. His brother Thomas went to work for him.

During his ownership of the Tribune, Dargie was noted for modernizing the paper with the latest printing equipment and hiring good reporters. He had plans to build a new structure for the Tribune at the northwest corner of 8th and Franklin Streets. There was an announcement regarding the plans in the San Francisco Call on May 15, 1905.

However, as a newspaperman, Dargie was far from universally loved and respected. In 1907–08, the San Francisco Call published a series of scathing critiques, beginning: ”The worst thing that ever happened to Oakland and Alameda county was William E. Dargie.” and ”Through his newspaper, the Oakland Tribune, Dargie became at once, and has ever since been, the evil genius of his community.” However, it’s also important to recognize a certain amount of “pot calling the kettle black” likely being at work—especially since those days (1890s–1910s) represented the apex of “Yellow Journalism”. 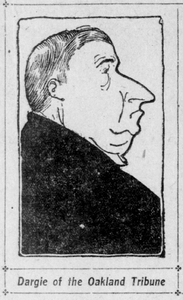 After William’s death, Herminia fought a lengthy legal battle with Joseph R. Knowland over the purchase of the Oakland Tribune. In 1927, she lived at 2090 Jackson Street.

U.S. President Chester A. Arthur appointed Dargie the Postmaster of Oakland on February 27, 1883. In 1884, there were accusations he was “mulcting” (nickel-and-diming, by fining and/or taxing) the post office employees, but other employees wrote a letter disputing this.10

After his term as postmaster was up, Dargie was elected State Senator for Alameda County (18th District) in 1888.

Mr. Dargie was also President of the Oakland Electric Light and Motor Company, and President of the Humane Society. 1 He also owned shares in Idora Park, and there were legal actions later stating Dargie had misrepresented the income of the park when selling the shares. 5 Dargie was a director when the Oakland Cotton Mills incorporated, subscribing for $100 worth of stock.

Dargie was a member of the Live Oak Lodge, A. F. & A. M. (Masons), and belonged to the Athenian and Nile Clubs.

William died February 10, 1911, “from the effects of a nervous breakdown and stroke.” The SF Call reported it as “valvular trouble of the heart, complicated by kidney disease.” 6 The California State Senate was adjourned in his honor. Dargie was quite wealthy at the time of his death, with an estate estimated at nearly $1 million. There was quite a bit of squabbling over Dargie’s will, as he and Herminia were legally in the midst of a divorce when he died. 4 It was eventually decided by the Supreme Court that they were still legally married, since there had been no final decree of divorce. Dargie was generous to his friends, but gave only $100 to a niece who married with little notice, which he found discourteous.

The Peralta-Dargie family have two large plots … in separate cemeteries. Dargie left $50,000 in his will for monuments in Mountain View Cemetery and Saint Mary’s Cemetery. 8

The separate burials may be due in part to William’s Masonic affiliation: the Catholic Church forbids membership in the Masons, so William couldn’t have been buried at Saint Mary’s. (Nor, for that matter, would churchgoing Herminia have consented to be buried anywhere but on Catholic ground!) 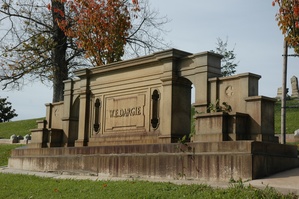 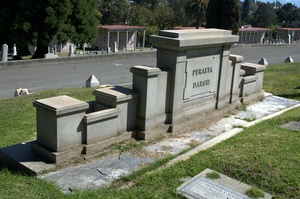