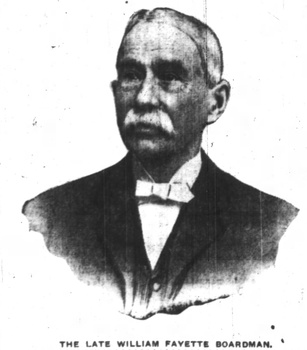 William Fayette ("W.F.") Boardman (September 24, 1824 – April 14, 1906) was a civil engineer and surveyor, and served for a time as a county assessor. He was also the grandfather of silent film star True Boardman.

Boardman was born September 24, 1824, in Salisbury, Connecticut, to William Boardman, a farmer, and Abigail North (Boardman). Not wanting to be a farmer, at age 16, he set out to make his way in the world.

He went to work for his brother Edwin L. Boardman in a dry goods store in Lockport, New York, and studied engineering. After leaving Lockport, he went to Massachusetts, where he opened a mercantile business with Norman K. Bills (who was the brother of his future mother-in-law.) 1

The 1849 Gold Rush caught Boardman's attention as it did with countless others around the world, and in 1851, he moved to San Francisco and opened a hardware store. His family joined him later, and in 1858, the Boardmans moved to Oakland. 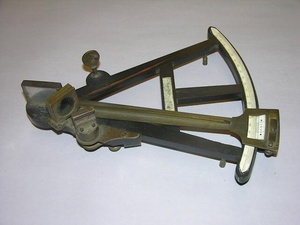 sextant used by W. F. Boardman 2Boardman began studying engineering on his own while working for his brother and continued after moving to San Francisco. One article indicates he also had some formal training, but it sounds like it was mostly learned on his own and then on the job. Regardless, Boardman maps were noted for their high degree of accuracy. 1

His first major project was a re-survey of San Francisco done between 1864 and 1868. In addition to surveying for the city of Oakland and Alameda County, Boardman surveyed for the Contra Costa Water Company, the Oakland Water Company, and several other water companies in the Bay Area and around California. He even surveyed part of the route for the first transcontinental railroad, between the crest of the Sierra Nevada and Truckee. 2

After a time working for the city of Oakland, Boardman became the Alameda County Surveyor.

In 1876, Boardman was appointed Alameda County Assessor for Oakland Township (which included the city of Oakland) to finish the term of Edmund Hunt, who had been removed from office. The question was raised: is he eligible to assessor of Oakland Township since he currently lives in Brooklyn Township? It was decided it was OK since the move to Brooklyn was temporary, and his office and much of his business was in Oakland. 6 In 1877, he was nominated by the Republicans for the next election. 5 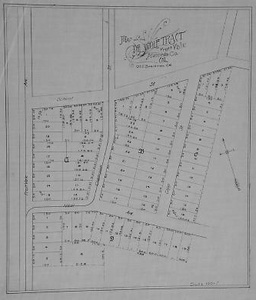