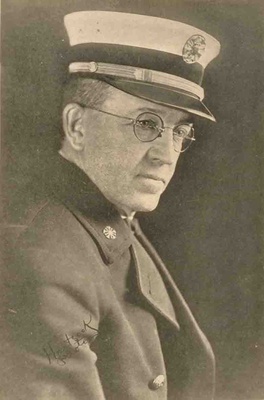 In 1909, Lutkey was named foreman of a new fire company at the Alice Street Firehouse. In 1911 he became the captain of engine company #11. In 1913, he was appointed a Battalion Chief to replace the deceased Sam Morgan, brother of Julia Morgan. 2 In 1922 he became Assistant Chief.

There were a number of changes in the city administration in 1927, and OFD Chief Short resigned. Lutkey was appointed Chief in his place. 3 He held the position of chief until his mandatory retirement in 1947. Over the years, he managed the department through the Great Depression and the loss of manpower during WWII.

William Lutkey was born July 17, 1877, in Oakland. He was educated in Oakland schools.

The Lutkey family home was at 1255 Alice Street for many years, where Lutkey lived with his father George H. Lutkey, his sister Fannie Mae Lutkey (Sanders), and his brother Charles H. Lutkey. Charles worked for the Oakland Traction Company as the head bookkeeper. His mother had died early in 1897 in a state hospital in Stockton when Lutkey was 19.

Lutkey and his wife Elizabeth "Bessie" Van Court (Lutkey) lived at 4449 Park Blvd. for many years.