William Gwin
image from the Library of Congress

William McKendree Gwin (October 9, 1805 – September 3, 1885) is famous because he was one California's first senators, and infamous because of his support of slavery and of the Confederacy. He's somewhat less well-known for a distinctive mausoleum at Mountain View Cemetery and for being a bad shot.

Gwin was born in Tennessee and and passed the bar exam at age 21. After attending medical school in Kentucky, he briefly practiced medicine in Mississippi. He was elected to the House of Representatives as a Democrat from Mississippi but only served two years, from 1841-1843. He came to California in 1849 and was part of the California Constitutional Convention to write the new state constitution. When California was admitted to the Union in 1850, he and John C. Fremont were elected as the first senators from California. He served from 1850 to 1855, and again from 1857-1961.

William Gwin was an outspoken supporter of slavery and the Confederacy. He was arrested twice for disloyalty after leaving the senate, and in 1864 traveled to France to try to convince Emperor Napoleon III to lend his support to American colonization of the Mexican state of Sonora. His "compromise" would resettle slave owners and their slaves there, but was understandably not popular on either side of the border. One of Gwin's chief opponents in California was David C. Broderick, who was staunchly against slavery.

Following an argument, Gwin had a duel with Joseph W. McCorkle with rifles at thirty yards. Each man fired three shots, but the only casualty was a donkey some distance off which was killed by a stray bullet. After agreeing to stop because someone might get hurt, they went to a nearby bar for drinks.

William Gwin retired to California. He died in New York City in 1885, and his body was returned to Oakland. William Gwin and his wife Mary (June 4th, 1815-June 26th, 1901) had at three children, William Gwin, Jr. (1843-1939), Caroline K. Gwin (1847-1906) and Lucy Gwin Coleman (1886-1902), all who are interred the family mausoleum at Mountain View Cemetery. The mausoleum is not the only pyramid in Mountain View, but is probably one of the best known partly because of Gwin's fame and partly because of its location relatively near the cemetery entrance, in plot 36. Egyptian motifs were popular for graves at that time. 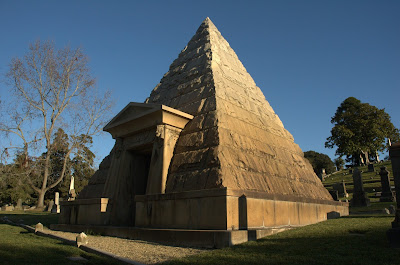 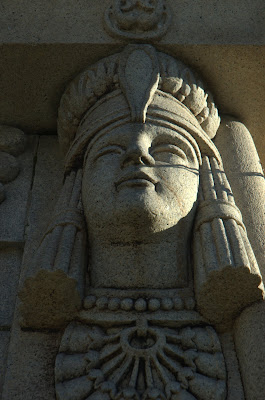 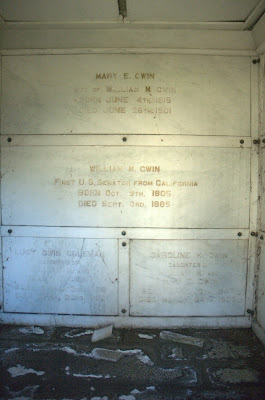