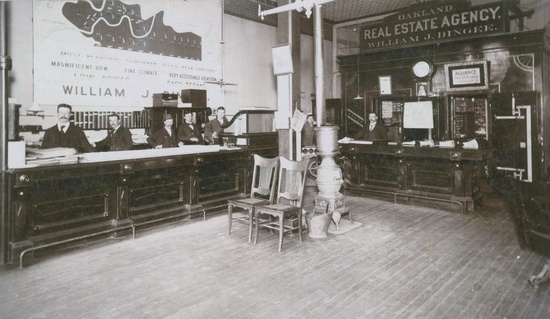 William Jackson Dingee (July 22, 1854 - September 5, 1941) established the Oakland Water Company to supply his extensive real estate holdings in the hills above Oakland. His real estate and water dealings gained him significant wealth before his fortunes collapsed and he exiled himself to anonymity in Sacramento.

Dingee was born in Pennsylvania in 1854. He came to Oakland in 1877 and worked first as a bookkeeper. In 1878 he lived at 979 Cypress (now Mandela Parkway). He did well in real estate; by 1888 he was living at the Fernwood estate (which formerly belonged to Colonel Jack Coffee Hays). Dingee married Virginia Rose ("Rosie") Dodge (Dingee) (? - March 22, 1914). Their Fernwood estate burned to the ground while the they were in New York.

Dingee's fortunes collapsed about 1908. One source says he was swindled by a business partner.

Rosie died of pneumonia in 1914. Dingee entered bankruptcy court about 1921, and died in obscurity in 1941. He and Rosie are buried in Sacramento. They had no children.

A small reservoir in Montclair not far from the Fernwood estate was named in his honor in 1959. 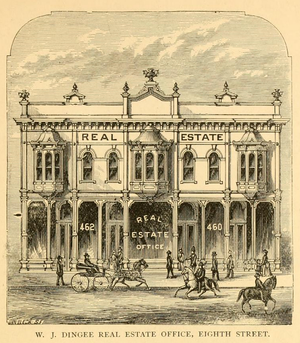 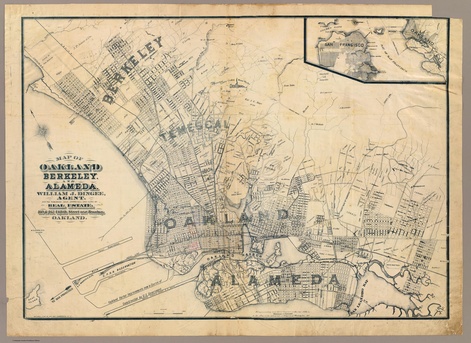 Mike notes: The Oakland History Room has an old photo of a lovely old estate I recognized from earlier research as Fernwood, the home of Col. Jack Coffee Hays. However it was categorized under D (for Dingee) not H, so I brought this to their attention … a week later, I’d clarified that Dingee had bought the place from Hays’ family, so went back and informed them … but they’d already re-checked, and verified that their photo was from the Dingee era. Go OHR!

Interesting history about William Dingee ... copy/paste ... needs to be rewritten ...

William J. Dingee is first listed in the City Directories in 1877-78 as a “bookkeeper” with Olney and Company.  He first appears in the Leimert Block in 1881-82 as a partner in the firm of  Taggert and Dingee, “real estate and general auctioneers”, occupying the spaces at 460 and 462 8th Street.  Dingee had advertised in 1885 that having “long resided in Oakland” he could offer homes “at all prices, from neat little tasty cottages at $1,500 to the more pretentious residences at $3,000 to $5,000, or the elegant mansion at $10,000 and upwards.”

In 1886-87, Dingee began to be listed by himself at this location.  He seems to have been quite resourceful in his business, his principal activity apparently having been land auctions.  By 1887, he was successful enough to construct his lavish “Fernwood” mansion and estate, in the present Montclair area.  The estate included a deer and game preserve.

Both Dingee and the Contra Costa Water Company continued to occupy their adjacent offices in the Leimert Block until the mid-1890’s, when they became ruthless adversaries during the celebrated “Water War”.  The water war started when the water company turned down a service request by Dingee.  He had wanted the water to develop some of his acreage in the Montclair – Piedmont area.  The refusal seems to have been due primarily to the company’s continued supply problems.  Dingee responded by drilling tunnels into the hills on his estate above Shepherd Canyon to tap underground water sources.  In order to pay for this costly venture, he extended his pipes beyond his Piedmont property and into the Oakland flatlands, portions of which were still poorly served by the Contra Costa Water Company, and forming in 1893 the Oakland Water Company.  This placed him in direct competition with the Contra Costa Water Company.

The competition soon became fierce.  Both companies hired experts to analyze each other’s water and to declare it unfit for human consumption, results which they then loudly publicized.  Holes were bored into Contra Costa Water’s marshland flumes, so that brackish water contaminated its supply for several days, and a City sewer was found hooked onto one of it mains, incidents which were blamed on the Oakland Water Company.  Oakland Water claimed that someone was pumping millions of gallons of fresh water out of its Alvarado Wells into the bay.  Dingee exclaimed, “The Contra Costa Water Company has hired newspapers to libel me…They have lied about the quality of our water…(and have) pumped lime into our lines….”  He also accused Contra Costa Water of cutting and blowing up his mains.  The war resulted in severe water shortages.  It became impossible to get water into the upper floors of downtown buildings in the afternoon.  Pitchers had to be used to carry water to the second floor of City Hall.  Mayor Thomas urged that the two companies consolidate and he threatened to form a municipally-operated water company to take over their service, but Contra Costa initially refused to consider consolidation.  Finally, in 1898, the City initiated formation of a municipal waterworks, which apparently induced the warring companies to merge under the name of the Contra Costa Water Company, but with Dingee in control.

Although Dingee and the Contra Costa Water Company remained neighbors in the Leimert Block at the start of the water war, by 1895 the Contra Costa Water Company had moved into the Blake and Moffit Block at the northeast corner of 8th Street and Broadway, its Leimert Block office being taken over by Dingee’s Oakland Water Company.  By 1899, after Dingee had gained control of Contra Costa Water, both operations relocated to the adjacent building whose address is now 801-7 Broadway.  At the end of the war, Dingee was a millionaire.  After his Fernwood mansion was destroyed in an 1899 fire, he moved to 1882 Washington Street in San Francisco, his residence being known as the “diamond palace”, and bought two mansions on New York’s 5th Avenue which cost $1 million each.  He gained control of the slate roof industry, started cement plant projects in California, Pennsylvania and Washington and became a San Francisco park commissioner.  When San Francisco’s corrupt Mayor Eugene Schmitz got into legal trouble, Dingee put up a $200,000 bond for him.

However, about 1908, Dingee’s empire crashed and he lost virtually everything.  He entered bankruptcy court in 1921 and died in obscurity in 1941.