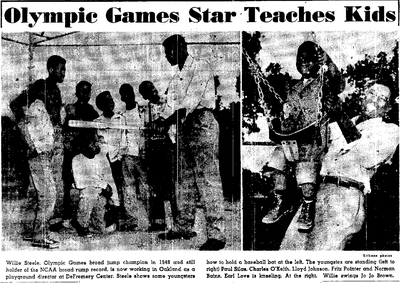 Steele served as a private in WWII.

Steele won the Gold medal in the long jump at the 1948 London Olympics. 1 He began working at the de Fremery Recreation Center in 1954 2, and he served as a director in the City Parks and Recreation department.

According to 1954 Oakland Tribune articles, Steele came to Oakland in 1954 to work at de Fremery, and had worked for the 6 years before that for San Diego parks and rec. 2 He had the top score on the civil service exam for full time recreation director. 3

Steele retired in 1988, and died in 1989 after a battle with cancer. He is buried in the San Francisco National Cemetery.