Wilson Riles, Jr. (1946-present) is a politician and community activist who served as a member on the Oakland City Council from 1979 to 1992 representing what was then, District 5  the Fruitvale District.  During his time in office, Riles supported the development of affordable housing in the downtown area, implemented funding for school programs, defeated a private detention facility from being set up in Oakland, was a leader in the Oakland anti-apartheid movement, and fought for a nuclear free zone ordinance. Currently, he lives on an urban farm/retreat center, Nafsi ya Jamii in the Laurel District. He is an advocate for a local currency in Oakland and continues to speak up on a variety of other Social Justice issues. 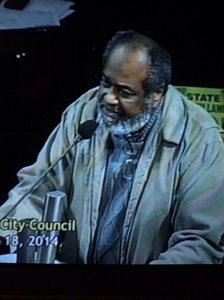 Riles speaks at a City Council meeting in February, 2014 against the Domain Awareness Center. Screenshot of KTOP.

Riles, Jr. is the son of Wilson Camanza Riles (June 27, 1917 - April 1, 1999) who was State Superintendent of Public Instruction and the first African American ever to be elected to a California statewide office.

In 1968 Riles earned his bachelor's degree in math and psychology from Stanford University.  Following graduation from Stanford, Riles taught math in Sierra Leone, West Africa from 1968 to 1970, while working as a Peace Corps volunteer.  Upon his return to the Bay Area, he took graduate level courses at University of California, Berkeley in child development and psychology between 1971 and 1973, and also taught math in the Oakland Unified School District at Hoover Junior High School.  Later in life, in 2003 he returned to education as the principal and a math teacher at the School for Social Justice [High School].

He is one of the founders of the Community Bank of the Bay.

Over the years, Riles has lectured at New College on the history of race, and he continued to be a respected public speaker and advocate.

Riles, a self described 1960s liberal Democrat, ran for Mayor of Oakland three times, the last time against Jerry Brown, who won the election.  He ran against and was defeated by Lionel Wilson in 1985 and Elihu Harris in 1990.

In recent years, Riles has been working on the Oakland municipal identification card/local currency card, Oakland CAN, Nafsi ya Jamii