Winedale Company was a wine and liquor business owned by Charles Jurgens and his son William C. Jurgens, noted for Copo D'Oro Wines. It started in 1905 when Charles Jurgens bought out the W. M. Watson Company, and ended around the time Prohibition took effect.

The last reference in the Oakland Tribune was in 1918, part of a full page spread welcoming the Tribune to its new location on 13th Street. 4 The Wartime Prohibition Act was passed later in 1918 prohibiting the sale of alcoholic beverages stronger than 1.28%; Prohibition itself took effect at the beginning of 1920. 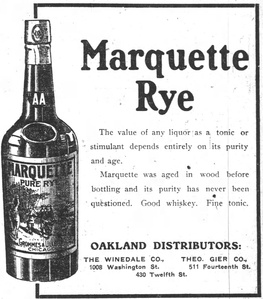