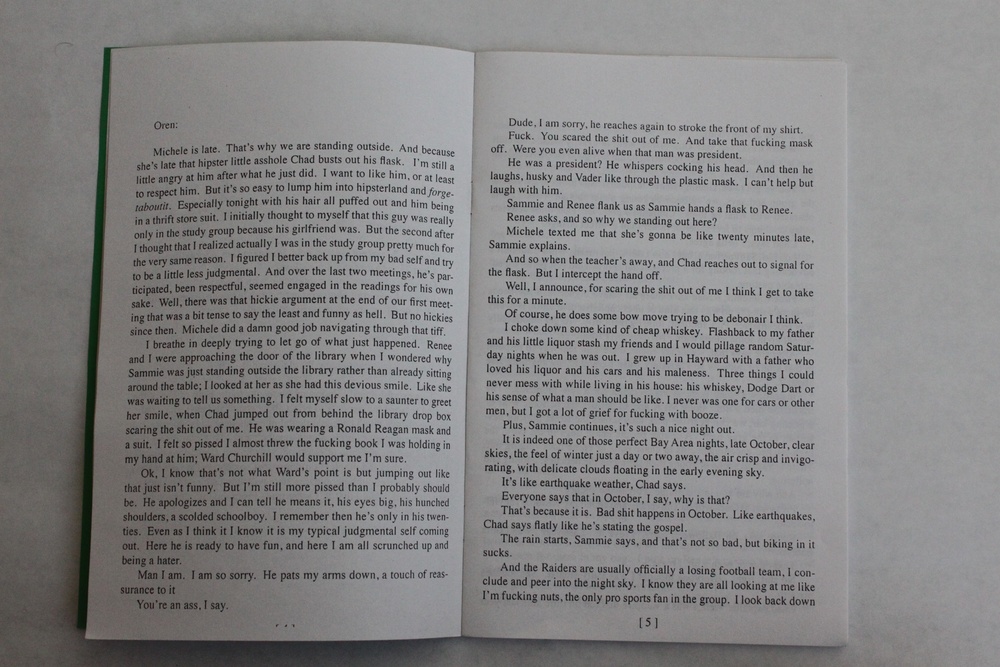 Michele is late. That's why we are standing outside. And because she's late that hipster asshole Chad busts out his flask. I'm still a little angry at him after what he just did. I want to like him, or at least to respect him. But it's so easy to lump him into hipsterland and forgetaboutit. Especially tonight with his hair all puffed out and him being in a thrift store suit. I initially thought to myself that this guy was really only in the study group because his girlfriend was. But the second after I though that I realized actually I was in the study group pretty much for the very same reason. I figured I better back up from my bad self and try to be a little less judgmental. And over the last two meetings, he's participated, been respectful, seemed engaged in the reading for his own sake. Well, there was that hickie argument at the end of our first meeting that was a bit tense to say teh least and funny as hell. But no hickies since then. Michele did a damn good job navigating through that tiff.

I breathe in deeply trying to let go  of what just happened. Renee and I were approaching the door of the library when I wondered why Sammie was just standing outside the library rather than already sitting around the table; I looked at her as she had this devious smile. Like she was waiting  to tell us something. I felt myself slow to a saunter to greet her smile, when Chad jumped out from behind the library drop box scaring the shit out of me. He was wearing a Ronald Reagan mask and a suit. I felt so pissed I almost threw the fucking book I was holding in my hand at him; Ward Churchill would support me I'm sure.

Ok, I know that's not what Ward's point is but jumping out like that just isn't funny. But I'm still more pissed than I probably should be. He apologizes and I can tell he means it, his eyes big, his hunched shoulders , a scolded schoolboy. I remember then he's only in his twenties. Even as I think it I know it is my typical judgmental self coming out. HEre he is ready to have fun, and here I am all scrunched up and being a hater.

Man I am. I am so sorry. He pats my arms down, a touch of reassurance to it

Dude, I am sorry, he reach again to stroke the front of my shirt.

Fuck. You scared the shit out of me. And take that fucking mask off. Were you even alive when that man was president.

He was a president? He whispers cocking his head. And then he laughs, husky and Vader like through the pastic mask. I can't help but laugh with him.

Sammie and Renee flank us as Sammie hands a flask to Renee. Renee asks, and so why we standing out here?

Michele texted me that she's gonna be like twenty minutes late, Sammie explains.

And so when the teacher's away, and Chad reaches out to signal for the flask. But I intercept the hand off.

Well, I announce, for scaring the shit out of me I think I get to take this for a minute.

Of course, he does some bow move trying to be debonair I think.

I choke down some kind of cheap whiskey. Flashback to my father and his little liquor stash my friends and I would pillage random Saturday nights when he was out. I grew up in Hayward with a father who loved his liquor and his cars and his maleness. Three things I could never mess with while living in his house: his whiskey, Dodge Dart or his sense of what a man should be like. I never was one for cars or other men, but I got a lot of grief for fucking with booze.

Plus, Sammie continues, it's such a nice night out.

It is indeed one of those perfect Bay Area nights, late October, clear skies, the feel of winter just a day or two away, the air crisp and invigorating, with delicate clouds floating in the early evening sky.

Everyone says that in October, I say, why is that?

That's because it is. Bad shit happens in October. Like earthquakes, Chad says flatly like he's stating the gospel.

The rain starts, Sammie says, and that's not so bad, but biking in it sucks.

And the Raiders are usually officially a losing football team, I conclude and peer into the night sky. I know they are all looking at me like I'm fucking nuts, the only pro sports fan in the group. I look back down...