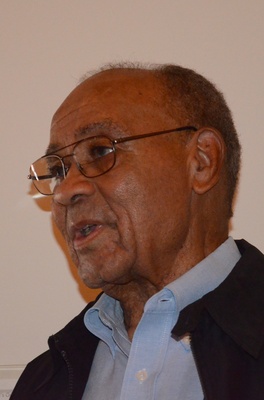 Rev. Wortham Fears
photo CC SA-BY-NC from Our OaklandRev. Wortham Banks Fears (b.1926) is a pastor in the Patten and Peralta Hacienda neighborhoods, and was one of the first black men to serve in the US Marine Corps, during WWII. Rev. Fears is an assistant pastor at the Christian Cathedral.

Fears was born in 1926 in Madison County, Georgia, the son of circuit-riding preacher and sharecropper James Fears and his wife, Irene T. Fears.

At an event at the Peralta Hacienda Historical Park in November, 2013, Rev. Fears shared his story along with those of other veterans. Wortham received his draft notice during WWII, and was expecting to be able to choose which branch of the service he would enter. Instead, he found himself at Montford Point outside Camp Lejeune, entering basic training to become a Marine.

Fears recalled the white drill instructor's words: "We didn't send for you. But now that you're here, we're going to try and make a Marine out of you. And if you die in the process, it's because you were no blankety-blank good to begin with." The discrimination went throughout the ranks; the commandant of the Marine Corps, Maj. Gen. Thomas Holcomb, said in 1941, "If it were a question of having a Marine Corps of 5,000 whites or 250,000 Negroes, I would rather have the whites." 1

Fears also recounted an episode while being shipped west on a train with other Marines. Having survived boot camp, he and other new Marines were being deployed to the Pacific. As the train slowed while going through a town in Mississippi, the Marines waved to people, both out of friendship and because they knew they might never come back. As the train rolled through town, Fears saw a man pointing a shotgun at the train. He followed his training and instincts and hit the deck. Later a friend from Mississippi said "When you're black and in Mississippi, you don't wave at anything white."

After serving in the Marines, Fears worked as a chauffeur to make some money, then came to California to attend seminary. Now Reverend Fears is an assistant pastor at Christian Cathedral Church, on the Patten University campus.

In June of 2012, Fears and other Montford Point Marines received the Congressional Gold Medal. The city of Oakland made a proclamation in his honor. 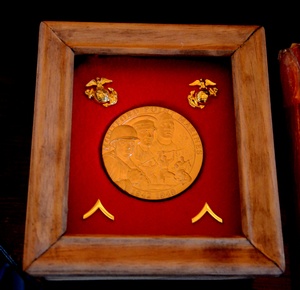