Wright Frost Kelsey (? - September, 1902) was an early Oakland pioneer, horticulturist and proprietor of Kelsey's Nurseries.  Kelsey was one of the first City Councilmembers of Oakland.

He circulated the petition for the first sidewalk in Oakland and was one of the founders of the First Presbyterian Church. Some articles claim that Kelsey was the first to conceive of what became the Kennedy Tunnel between Alameda and Contra Costa Counties. 4

The Kelsey home and nurseries were situated at what is now 23rd Street and Telegraph Avenue. He later moved to Fresno after financial reversals, but returned to Oakland and a house at 768 15th Street before passing away. 5

In the City Council records from late 1860s and early 1870s list W.F. Kelsey, nurseryman and hoteler and one of the property owners next to or in Upper Chinatown. 2

The California Horticulturist and Floral Magazine of 1875 had the following account of a pleasant visit to the Oakland Nurseries: "The first place we stopped at was Mr. W. F. Kelsey's Nursery and Floral Establishment, on Telegraph Avenue, commenced in 1852.  Mr. Kelsey has again undertaken the management of this business, with Mr. David Tisch as foreman" ...  [long description as to Mr. Tisch's experience as a nurseryman] ... "At this nursery may be found fruit trees and plants of every variety and kind, evergreens, and ornamental trees and plants, bulbs, roses, etc.  Mr. Kelsey has put up additional buildings to accommodate his many boarders.  It is a delightful location to enjoy both country and town, as the street cars pass the place every five or ten minutes." 3 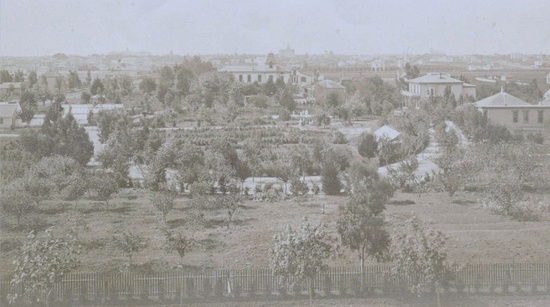 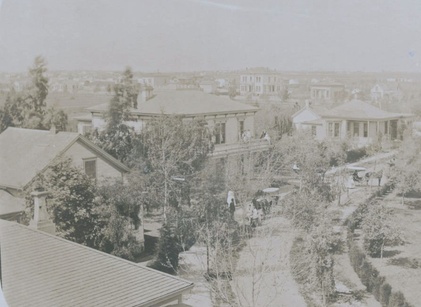 View from the upper floors of the residence of Wright Frost Kelsey, looking north from the vicinity of 24th Street and Telegraph Avenue, Oakland (1872) 1