(Contributed by Oakland Pioneers - No. 67)

AMUSEMENT GARDENS IN EARLY DAYS (No. 2)

As I said in my last, when Miller had to move from Broadway and Fourteenth, he went out to Temescal, now called "Alden," and opened a new park just opposite the car barns, at Telegraph and Fifty-first. The park occupied about two acres and had all sorts of shade and ornamental trees, together with a round dancing platform and all of the trimmings that go with an amusement park. Temescal creek ran through the north end of the park, and at a later day a large building was constructed immediately over the creek.

This place was very popular for picnics given by the different lodges and societies, and one was always sure to have a good time there.

Miller was a man who would not stand for any rough house or card sharp games, so one was at home in the park. What took place on the outside of the park, however, was none of his business, and they sure did pull off some games of chance around there, such as the shell game, the three card game and a lot of other games for the operators to get easy money.

And how some would bite! It sure was a crime.

Now I will tell you of a little joke played on the handy man employed at the park. It was like this: His first name was Freeman, his color was black; his last name - well, never mind, enough said, as some of his folks may be with us yet. Once about so often he would fall off the water wagon and then would find an out of the way place in the park and sleep it off. One day some of the boys found Freeman asleep and played a trick on him that he never forgot. They took his hat and in the sweat band put two thin pieces of Limburger cheese, then stood by until he woke-up. Well, when he did, it seems he got a whiff of that cheese and made a break for the creek, took off his hat and took a wash, then walked back a ways, turned around, went back to the creek and took another wash. One of the boys then stopped him and asked what the trouble was. "I sure do smell like a skunk." "Well, take off your hat, maybe that is where you get the smell from." Off comes the hat and then he said. "For the Lord's sakes. I sure think that the skunk has found me, and when I wants to sleep again it sure never will be in this here park. It I ever finds the person what did it, I sure will tell him what I thinks of him. I sure will never forget the smell of that skung chees as long as I lives."

All one would have to say to him was, "Freeman, how about the cheese?" and you would start something. but he never found out who put the Limburger cheese in his hat.

Now let's go out to the Willows, or as afterwards known, Shell Mound Park, at Emeryville. Although it was first known as the Willows when Capt. Siebe took over the park, he changed the name and for this reason: In the park there was a mound and he wanted to build a pavilion on the top of the mound. When the contractors got busy and started to dig for the foundation, they found a lot of oyster and clam shells in the mound; then they discovered that the mound had been an old Indian burial ground; so the captain changed the name to Shell Mound Park. Under the new management the park became very popular, particularly with San Francisco people, for picnics on Sundays as well as week days. Well, the park had everything that was needed for public amusement and good times were always to be had there. There was the target range where all of the crack shots of the state would come and meet and shoot for trophies. Then there would also be turkey shooting, where all you could see of the turkey would be his head,

How some of those boys could shoot! Some of the crack shots, as I remember them, were Philo Jacobi, Dr. Pardee Sr., Capt. Şiebe, Col. Kellogg, Henry Maloon, Chas. Bradley and Nick Williams. Take Jacobi, for instance, if you wanted to lose a 25 cent piece, all you had to do was to kiss it goodbye, toss it again the air, for that would be the last of it if he got a shot at it. Why, those fellows could shoot a flea on the jump or the hind leg off a fly.

Then the Schutzen Verein, or German shooting club, from San Francisco, used to do a lot of target shooting at the park, and there was also the Pistol club, which did considerable shooting there and had some fine shots. As you know, this park is still on the map, many picnics being held there in the summer time, but the crowds have changed and they are not of the rough kind as in bygone days.

Now, boys, let's go home, as it is getting late.

Happy New Year to you all, and many more, too. 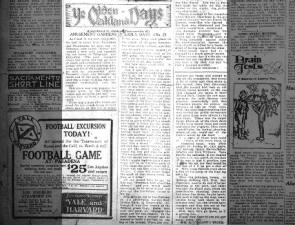