WILD GAME IN EARLY DAYS. (Contributed by Oakland Pioneers - No. 25.)

Oh, Boys! When I see in the newspapers nowadays that this man or that got the limit of wild game, it takes me back to my boyhood days here in town, when I used to go hunting. At that time, game was plentiful and there was no limit. We shot only as many as we wanted, and did not shoot to see how many we could get. Well, in 1867, I lived on the east side of Telegraph road, between Fourteenth and Sixteenth streets, Broadway stopped at Fourteenth street and New Broadway was not opened up at all until August, 1868, then the old road took on the high-toned name of Telegraph avenue.

Now, back to what I started to tell you, when I would go home from school sometimes, Dad would say, "You better go and see if you can get some wild game for dinner tomorrow night." All I had to do was to get my gun and make for the neighborhood of what is now Franklin and Twentieth streets. There was a little creek which ran from Delger's place near 20th and Telegraph, down into the lake, and along there I could get any old thing in the way of game - ducks, snipe, mud-hens, curlew, etc. I had a single-barrelled muzzleloader, and she surely was a peach of a gun. Say, I could almost shoot the eye out of a fly with it; but, sometimes she would kick to beat the band. Well, it was sometimes my fault, for, in my haste, I would ram the shot and then got the kick good and plenty, so I would have a black and blue mark on my arm for weeks after. I think Uncle Sam never had a mule that could hold a candle to that gun when it came to a kick.

In the winter time, Lake Merritt would be alive with wild geese and pelicans, but I never went after any. I might take a shot at them once in a while just to see them get a move on, and it would sure be some move and their honking would make you think you were in Chinatown at New Year's time. All same, your cousin, 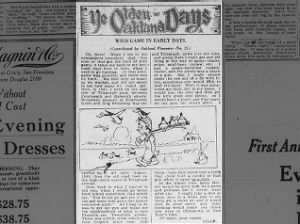