Say, boys! In continuation of my former articles about the early day amusement parks. suppose we now go back to the old Badger's Park in East Oakland. At first it was the home of Captain T. W. Badger, being on the south side of East Tenth street, between Seventh and Tenth avenues, and extending southerly to the railroad track on the S. P. Company, as I remember it. Well, about 1874 the Captain saw that Oakland needed a new park and felt that his place was right and would fill the bill, so he got busy and made, out of his home property, what was really a first-class amusement garden, for those times. It was a good deal after the style of Woodward's Gardens in San Francisco, only on a much smaller scale. There was a dancing and skating rink, bowling alleys and shooting galleries, a zoo, museum, restaurant and the usual trimmings which go with a park of that kind.

Then there was the amphitheater in which Bartholomew's trained horses used to do a lot of stunts, also Humphrey's educated horse which could count and do other tricks, donkeys to ride - for two of them there was a standing offer of a dollar to whoever rode either of them once around the ring. Do you know of any one who ever got the dollar? One of them would let you get on and then just lie down, and that's a far as you would get. The other one would let you get on, then take one or two Jumps and off you went.

Then there were the freaks, such as Jo-Jo, the dog-faced man; the Wild Man from Borneo, who was wild in his cage, but when outside was just as tame as the rest of us. There was the skeleton man, almost as slim as a lead pencil, and other freaks, such as the bearded lady and the tattooed man; and they had games for prizes, such as the greased pole, the greased pig, the three-legged race, and so on.

Well, there would be something doing all the time, to keep it interesting for the patrons, who came in large numbers, particularly on Saturday and Sunday afternoons. Once Bob Ingersoll delivered one of his lectures there.

Then, here is a boy that I used to think a lot of and many of you will remember him - the only J. M. J. Kane, a newspaper man. Can any of you remember the year when he delivered the Fourth of July address at Badger's Park? [It was 1888. - MF] It strikes me it was about 1878, and if there ever was a live and wild boy, little Joe sure did fill the bill. But Joe has left us long ago and gone to a place where there is no checking out again; once in, that settles it.

Many picnics were held at the park, for it soon became a very popular place and got on the map, good and strong, as the saying goes. Such clubs as these would come over from San Francisco: Hayes Valley Social Club, Mission Rock Club, Owl Club, Easygoing Club, Hugmakers' Club, Morning Star Club and Sunshine Club, and there were a lot of others.

It was very convenient for they could come over and get off the train right at the door of the pavilion, and some of those picnics were sure lively affairs, and the doing at the park sometimes might be called a hot time, Many of these clubs came from the south of Market street district in San Francisco; boys bringing their girls with them, all dressed up-to-date in their Dollie Varden suits, banged hair and bustles and they sure did have some bustles in those days. The style for the club boys at that time was skin-tight pants with spring bottoms, puffed hair and stiff-rimmed hats, which were all the style at that time. Then, if they didn't have a dozen fights or so at the park during the day. It was a very tame picnic.

But on the way home - that was the real time. The local train would have three or four special cars at the rear end for the picnic crowd. The train crew would just lock the doors and let the boys have their rough-house to their heart's content. They would sometimes fight over the girls, break the windows and so on until they got to the ferry. On the boat there would be a reception committee of five or six San Francisco husky policemen with night clubs. If any of the bunch tried to roughhouse, the police would just give them a tap on the coco, and put them to sleep until they got over to the city, that was the only way to get along with them.

Then the Italians would have their annual picnic at the park, bringing their red wine with them in demijohns; and it was a great sight to see the parade of demijohns; and when one got into the park, he did not have to ask what picnic It was for you could smell the garlic in the air.

Old Captain Badger, the proprietor, was a medium-sized man, heavy set and rather rough in his ways. One would think, when speaking to him, that you were aboard his ship and taking orders from him; and still he had his many good ways about him. His dress was up to date, with high hat, white tie and good store clothes, and he also had a good, fast road horse, so he did not have to eat the dust of any of the other sports when he got out on the San Leandro road for a brush with them.

And what was that old song about "Kitty Dear and Me Way Over at Badger's Park"?

Yours, same as before, 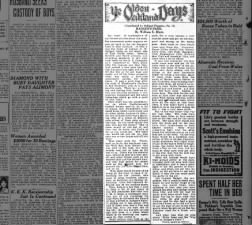