(Contributed by Oakland Pioneers, No. 57).

Says boys, do you ever think of the time when Chinatown was located on Fourteenth street, between Washington and Clay? At that time this was the northerly limit of the city, and this settlement was sure some Chinatown. Most of the Chinamen lived in one-story shacks with a store in front. They had a big Chinese trade, for at that time all of the cheap labor here in California was done by Chinamen, who then worked for a dollar a day. Chinatown was pretty big settlement, for I think there must have been about a thousand of them packed in there.

As the town improved, the city fathers made the Chinamen move to a new location, so they moved out to the east side of Telegraph "Road" between Sixteenth and Seventeenth streets, on the Birnie place, just north of where I then lived. Broadway not having been opened at that time, which was about 1867. They got their little town all fixed up in good shape when one night a coal-oil lamp exploded and the whole race went up in fire; and it was some fire, I tell you. Did the Chinamen do anything to put it out? No, they Just stood around and made a noise something like a flock of geese.

The exempt fire department got out the old engine and succeeded in saving the lot only. The lot was surely saved, for the Oakland post office stands on a part of it today.

The next move was to the east side of San Pablo road, between Nineteenth and Twentieth streets, running around onto Twentieth street, which property at that time belonged to old man Ed Hogan, and was just west of the late Frederick Delger's beautiful home. Hogan and Delger never loved one another very much, so Mr. Delger got after the city fathers, who made Chinatown again move on.

The next place they went was nearby - on Charter, or Twenty-second street, as it is now called, and San Pablo road. Well, the town kept on growing and our good city fathers made the Chinamen move on again. No one wanted them for neighbors, but at last one of the city fathers who owned some property on First street between Castro and Brush, together with another property owner on First street, let Chinatown in on this new site. By this time, however, a good part of the town had got lost and the new Chinatown was much smaller. See how it afterwards got back right into the heart of the city, where it is now. One can never tell!

In those early days, we had a lot of Chinese peddlers, and what loads they could carry! Each one of them had two baskets, one on each end of a strong pole, which they carried on their shoulders; and if they packed a pound I think they packed ton, for they were surely loaded down to the limit.

As many as twenty came over from San Francisco every day, bringing vegetables and fruit, each one having his own route from house to house, Ask any one of these who his Chinese friend was, his answer always was: "All same, my cousin. What for?"

Do you remember how these Chinese would walk along in the street just like a bunch of tame ducks, always one after the other? You never would see them two abreast, whether there were two or twenty of them, but always one behind the other. Each one wore a black hat, and the members of the Chinese Six Companies each had a different shaped hat.

We boys used to row over to China Point on the Alameda side of the Creek and get dried shrimps and eat rice with the Chinese fishermen. What a long pull it seemed to us! For fifteen cents we could get all the shrimps we wanted to eat: and how good they did taste after that long row! 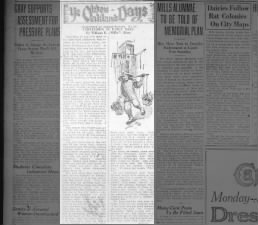