(Contributed by Oakland Pioneers - No. 58)

THE CREEK FERRIES OF EARLY DAYS

Not least among the interesting tales of early Oakland days is the story of the various creek ferry boats, and particularly the raid of the Chin du Wan: sometimes known as the "Chin Dugan," the Oriental-Irish steamboat of sternwheel design which shouldered its way into the wharfage rights of the city's waterfront, in defiance of established claim.

In the early days of Oakland, the transportation of passengers and freight into Oakland all came by way of the Creek Route, then known as the San Antonio estuary. and previous to 1854, the territory where Oakland now is was designated as the Contra Costa side of the bay. Alameda county did not then exist, but was afterwards carved out of Contra Costa county,

Among the first steamboats engaged in the passenger traffic was a small boat named the "Yellow Jacket," which blew up at her landing in San Francisco. The steamboat Clinton was then placed on this route for regular service by the Minturn Transportation company, which leased for a term of years the wharf at the foot of Main street, now Broadway, thus depriving any other prospective ferry boats from a landing. Her cargo of freight from the San Francisco side consisted mostly of groceries and farming implements for the settlers on this side of the bay, and on her return trip she took back cattle, hides, tallow, garden truck, etc., for the San Francisco market.

With the growth of Oakland the outlying territory on this side of the bay became the farming center of the state. Many of the large ranches were divided into small farms and what is today the city of Oakland and vicinity became one vast orchard and vegetable garden. The freight capacity of the little steamer was soon taxed to its utmost, a new boat was built, the Contra Costa, and service of four trips a day was inaugurated,

Although there was a great increase of travel and freight carried, the rate remained the same, whereby the merchants and farmers became dissatisfied. Protests were of no avail. So they determined to shake off from their throats the hands of this steamboat company and its profiteering backers. An opposition boat, the Kate Hayes, was put on, but she was of short life. The owner through threats and probably other considerations withdrew her from the service.

About this time James Larue, a prominent resident of San Antonio, now East Oakland, formed a company for the purpose of breaking the existing monopoly. At the foot of Twelfth avenue they built what was then the largest steamboat on the bay, and which was named the San Antonio. About 1860 she was launched and ready for service by the Larue Ferry company,

But the new company had a steamboat but as yet no landing place, the Minturn company holding the rights and privilege to all landings under their existing lease, 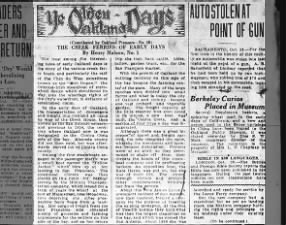