(Contributed by Oakland Pioneers - No. 61)

Say, boys: How about Hardy's Woods in the early days - say, away back in the early '60s? Have you forgotten those good old days when we used to go hunting there for cotton-tail, quail and wild blackberries? Did we get all we wanted? Well, I guess yes, and then some.

As I remember the woods, they began at Sixth and Market streets, then north to about Fourteenth street, then west, say to Linden street, and then south to about Fourth street. At that time there were no open streets through the woods, or anywhere west of Market street. It was all woods, underbrush and cow paths. Some of these paths would stop at a big oak tree and then you would have to try another path and maybe get lost and have a time of it to find your way out. I know that some of you could tell a good story or two about the Woods. Wake up and let's have it.

How about Hardy's pond, where the kids used to go swimming, at the foot of Market street? Then there was Hardy's creek, south of First street, where the big boys went for a swim; and we sure could get a good one in the creek.

Also, how we used to tie each other's clothes in knots, making them "chaw roast beef," and what a laugh we would get out of it! They would be tied so tight that we had to use our teeth to get the knots out.

Now, back to Hardy's Woods again. You remember the camp meetings they used to have in the woods, and the good times we had at these meetings. Did we sing the hymns with them? Why, of course we did, and how loud and enthusiastic we were! Then the preacher would say, "My sisters and brothers, not so loud; the Lord can hear you all right, as he is not deaf or hard of hearing." Then at the end of the meeting they would take a lot of converts down to Lake Merritt and baptize them. Well, here was some more fun for us, to watch them get a ducking in the lake and come up with a mouthful of salt water and spit and cough and say "Amen."

I spoke of quail in the woods. That puts me in mind of how the ranchmen used to trap quail in "figure four" traps, then crate them like a lot of chickens and send them to San Francisco, where they could be bought for $1.25 or $1.50 per dozen, alive.

It was nothing unusual to see a lot of these crates on the sidewalk in front of a commission house along the waterfront in San Francisco. Many of the ranchers around Oakland used to trap them. Some set as many as ten or twelve traps on a single ranch.

Oh, boy! What do you know about the old swimming hole on the east shore of Lake Merritt, at Remillard's brick yard, north of where East Fourteenth street would be and about where the car barns now are? We sure used to get a good swim there. Then south. of it and between there and the bridge (now Twelfth street) was the old Butcher Town, or slaughter houses.

See what a change now. A few of the old boys are with us yet, including Lowell and William Hardy, whose family and residence gave the name to Hardy's woods, creek and pond which I have mentioned.

I could tell a good fish story too, but I think I had better not for I know someone would sat "Are all liars fishermen, or are all fishermen liars?' How about this? Next.

Yours, same as before, 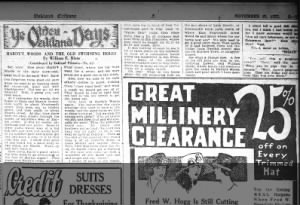