(Note - Apropos of the recent death in this city, of Myron T. Dusinbury, conductor of Oakland's first railroad, the following account of the building of the road, written by him for the Oakland Pioneers some time ago1 2, and now reproduced from the columns of The TRIBUNE, will be of interest.)

On August 8, 1862, I helped to break ground for the Seventh street local railroad. It was built by George Goss and Charles W. Stevens, the latter being a brother of A. J. Stevens, afterwards master mechanic of the Southern Pacific company for many years. It was then said to have been financed by French capital furnished by Charles Mayne, a capitalist and banker of San Francisco. Alex. McBoyle came over with me from San Francisco on the steamer Contra Costa,3 4 each of us with a pick and shovel, landing at the foot of Broadway. The fare was 50 cents. We made our way down to West Oakland, then known as the "Point," where the work was started. We commenced by boring holes for the piles with a big auger, dropped the piles in the holes, built a section or two of piling, then a pile-driver was built on top of these piles and pushed along as the piling was constructed westward.

There was a horizontal, circular saw connected with the engine of the pile-driver to saw off the piles when they were driven deep enough. The piles were brought down from Oregon in sailboats and were discharged on the east side of Goat Island, where the wharf is now located, and our men rowed over there every morning and towed some piles to this side for the wharf.

We had a bunkhouse which was built by John Scott, afterwards known as "Colonel Scott," who was then a builder and afterwards a newspaper man, owner of the Oakland Transcript for a number of years. His two sons are living here now - J. Walter ("Bud") Scott, advertising agent, and Joe D. Scott, veteran letter carrier.

When the wharf was done and also a trestle was erected across the slough at the head of Hardy's Creek, at about Seventh and Filbert streets, four or five of us workmen cleared off the right of way along Seventh street from the bay up to Broadway, cutting down trees and shrubs and shoveling out the dirt ready for the ties.

The first locomotive (for the local or Seventh street railroad) was built at the Vulcan Iron Works, San Francisco, [and] was brought over in pieces on the Creek boat and put together at the Point. Afterwards they bought from the Market Street Railroad in San Francisco, then a steam line, a mongrel locomotive, known as "Old Betsy," but which was little more than a stationary engine in a box car connected up with pair of driving wheels. Originally three cars were built at West Oakland and one was bought from the Market Street Railway in San Francisco.

Among the carpenters was Scotchman of brilliant artistic attainments who continually amused himself and the other workmen by drawing portraits on pieces of wood or paper or whatever he could get hold of. Afterwards he wrote a book entitled "Squibbs," which was published in San Francisco, then later went East and became famous. He was the well-known writer and artist, "Palmer Cox," author of the "Brownies," who also wrote and Illustrated for years in the publications of Harpers and others.

"The foreman of the road was a Scotchman by the name of Macdonald, who was brought down from The Dalles in Oregon, where he had been engaged in railroad work. One day when we were working on the piling fellow named Baker came along asked for work, and was refused. Hanging around and watching the work, he told the foreman that the piles would drive easier it we did not point them as we were doing. So we tried driving them with the lower ends square and found that they did drive much easier. "Mac" then set Baker to work and he held the job for a long time. I was originally a painter and my friend McBoyle was a dry goods clerk, and Stevens was a relative of mine by marriage. The first train ran on September 3, 1862. the road being known as the "Oakland Ferry and Railroad Company," and five trips at day were made, the fare being 25 cents. The boat running from the pier to San Francisco was the steamer "Louise," which was the first double-ender ferryboat on the bay.

I was conductor of this railroad up to 1870, when I entered the employ of the Oakland Bank of Savings, then located on the west side of Broadway, between Eighth and Ninth streets. There were only four of us altogether in the bank, P. S. Wilcox being president, John L. Browne cashier, a man named Outwater bookkeeper, and myself as assistant cashier.

A few years after the railroad started up, Larue, who was operating the Creek ferry, put his fare down to 5 cents, which resulted in his ferry being bought out by the railroad company. 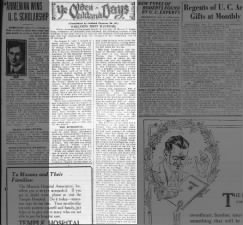