(Contributed by Oakland Pioneers - No. 22)

Oh, boys! Do you remember the great times we used to have when we were boys, on Christmas eve and Christmas day, shooting firecrackers just the same as if it was the Fourth of July? In those, days some of the boys picked out and went to the Sunday schools which gave the best Christmas presents; but as for me, I went to all the Christmas trees, as I was anything in the way of religion. After those early, boyish days, however, I went back to my own Presbyterian Sunday school. Lady Howard was the teacher, and a good one, too.

Then the next good time was New Year's eve. Did we ring the church bells? Well, I should say so, and made all the other noise we could. It seems to me I can hear it to this day. I have not mentioned any of the boys' names, as it might get me in wrong by giving them away, or they might get in wrong at home with their own children.

Along about forty years ago, it seems to me our winters were the best part of the year, being so mild and warm. I think it must have been on account of the many oak trees we had all over town, that we never seemed to have any frost. We could usually tell a stranger in town, on account of his having an overcoat with him; this was something we had no use for. But see the difference now. How conditions have changed, the same as everything else, and for us the good old days will never come again.

Among the peculiar characters in town, I am sure you all remember Billy Fireball. He got his nickname in this way: The old Oakland brewery was at that time at the northeast corner of Broadway and Ninth streets. Well, one night it caught fire1 and Billy, with the fire company, picked up an old cannon ball and was trying to break through the roof with the ball on top of the brewery. That is how he got that nickname, but his real name, I think, was McManus. [Patrick McNamara2] He was on a jury one time in a case involving some stolen chickens and asked the man who lost the chickens if he could tell them if he saw them. The man said "Yes" and Billy asked whether they had any feathers on their legs or not, and the man said "Well, I don't know." "Then you don't know your chickens. That's all." He ran for mayor at one time. A good many voted for him as a joke. We all thought he won, but that he was counted out.3

Well, boys, Merry Christmas and Happy New Year to you all! 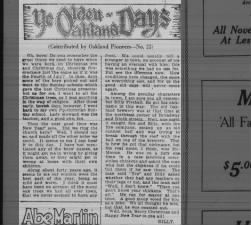