March 25, 1854, Oakland was incorporated as a city and Horace W. Carpentier was elected its first mayor. At this election 368 votes were cast, though the actual number of legally qualified voters was certainly very much less. This was made manifest at the election of county officers the following year, when only 202 votes were cast in the city. Ballot boxes with false bottoms were quite common in those days, and it was no uncommon thing to hire a steamer and fill it with "roughs" and take them to various points about the bay to vote.

A weekly paper called the "Alameda Express" appeared in Oakland some time during the year 1854.

A fire department was organized and a small hand engine was obtained from San Francisco. Col. John Scott was placed in charge and was the first fire chief of the city. Cisterns were dug at the crossings of Second and Fourth streets with Broadway and planked over at the street level. The one at Second street was filled from the estuary by the fire company and the water was pumped from this to the cistern at Fourth street. The fire company had only a small amount of hose, which made it necessary to put the suction pipe down a well when the fire was at any distance from Broadway. In spite of all the drawbacks, however, the fire company did very effective work.

The school department was organized, its only building being the so-called "Carpentier schoolhouse," at the northeast corner of Fourth and Clay streets, a wooden structure about 22x38. Before this time a school had been maintained at the northeast corner of Fifth and Broadway, the first teachers being Mr. and Mrs. Franklin Warner and Miss Hannah J. Jayne, who later became Mrs. Edson Adams. Other departments necessary for a rapidly growing city were organized as occasion demanded. 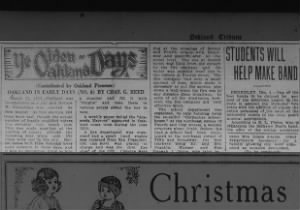