(Contributed by Oakland Pioneers--No. 37) UNCLE FRED AND HIS BIG GAME

Say, boys! Do you remember Fred Olney, or "Uncle Fred" as we called him? He lived in a little shack just about back of where the Grant school now stands on Cemetery creek, the present Richmond boulevard. Well, he was good old sport, but what yarns he used to tell about the big game he would shoot in the night time, animals which he said were trying to get into his shack, such as lions and bears, and how he would let them lie until morning but during the night coyotes would come along and eat them up, so he was never able to show them to us. So, one night we put up a job on him. Jack Hays, John Coffee, Will Hawkett, Ed Carr and "yours truly" went out to investigate for ourselves, and what did we find? Lots of big game - cows, calves and hogs, but nothing else. We never let Uncle Fred know what we found out about the “big game” which he claimed he had been shooting, so he kept right on telling his yarns. He was also a great user of tobacco, both smoking and chewing. 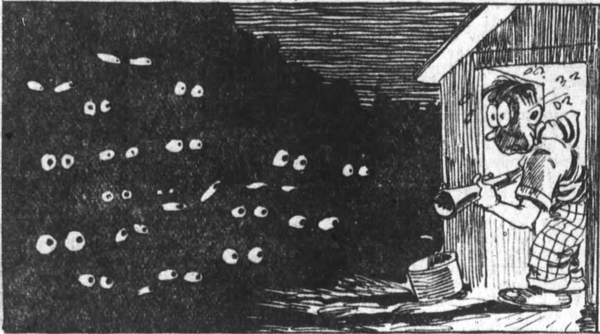 Well, at any time I was looking for small game, I would take my gun and walk to about where Twenty-third and Harrison now is - for at that time we had no open streets - then get into the bed of Cemetery creek and follow it up. By the time I got to Uncle Fred's shack, I would have usually from four to eight cotton-tail rabbits, and it was no trick to have a mess of quail, robins, doves or meadow larks when they were in season. Then sometimes I would go out into the open after squirrels; for you remember what a good stew they used to make. If you did not shoot them dead on the spot, however, they would wiggle into their holes and that was the last you would see of them.

There was one squirrel that seemed to have a charmed life; for if I shot that beggar once, it was ten times, so I gave him up as a bad job and did not waste any more shot on him, but stuck a stick in his hole so in case at any time I came around I would not waste any more shot on him. At last I missed him from his usual hole, so some one must have got him. It seemed as if he knew me, for when I would come along, he would chirp and then duck into his hole. Did you every try to shoot one? Well, don't, but just save your powder.

Do you remember the trestle on New Broadway that ran from about Nineteenth to Hobart street, across the little creek from Delger's, west of Telegraph, for the horse cars, which they then called the Mountain View line, and how the boys on the cars used to "soak" any one driving below it?

Everyone was a target for them, but people had to drive that way, as there was no driveway on the trestle, and the boys usually had something in their pockets to throw at them. Same as ever. 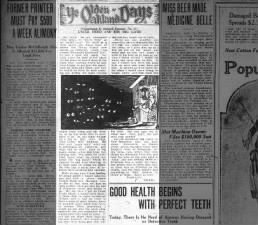