(Contributed by Oakland Pioneers No. 40.)

AROUND TOWN WITH THE BOYS IN EARLY DAYS (NO. 4.)

Say, boys! Do you remember, Walters, the street peddler, and how he could sing? You could hear him two blocks away when he would sing, "Sweet oranges, sweet oranges! a lump of sugar in the middle of each one of them, 5 and 10 cts, a dozen!" Sometimes he would have a load of honey in the comb, and would sing "Honey in the comb! Bring out your money! Too good for the money! 5 and 10 cts. a comb!" Then again he would have a load of wild game, such as Mallard and Canvasback ducks at 20 cts. each, or a load of wild geese at 35 cts. each, or a load of peanuts at 5 cts. a quart. He always was on the street with something to sell. Well, he got so that in time he was the owner of four houses; so you see that he surely did not lose anything on his street peddling job. 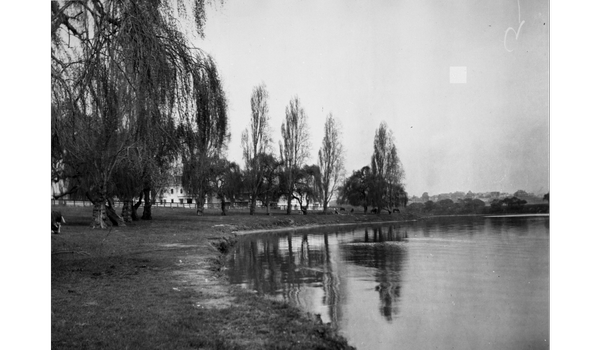 How about the Willows on the west shore of Lake Merritt - some place to go on a Sunday afternoon or a moonlight night with your best girl - well, I guess yes. There must be some of those best girls in town yet, and maybe if they should see this, they might sit up and take notice and perhaps say, with a sign, "Oh, gee, those happy days will never come again. Oh, my weeping willow!"

How about the wooden awnings on the west side of Broadway, between Seventh and Twelfth street. When it rained, did we get wet? Not so that you could notice it. It used to be a great hang-out for the boys of a rainy night, and there one could meet the other boy's best girl and find out what might happen in town or what did happen, for that was the only way to get the news, you know. The girls never told anything only on the Q. T.-am I right?

How about Brayton's cherry orchard? If I remember right, I began at Grove and Twelfth and extended west. At that time Twelfth street was not open west of Grove. Well, we boys would sometimes split up into three gangs and make a raid on the orchard. While the caretaker, old Temple by name, would be chasing one gang, the others would get their fill of cherries, and we kept this up until all of the three gangs got their fill of cherries; and sometimes we sure did keep him busy in that cherry orchard. And such cherries! “Oh me, oh my!" 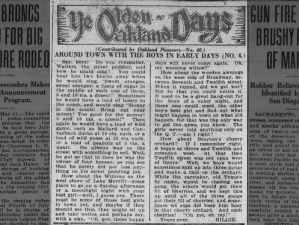