MELONS, SALLY HART AND THE FAKIRS

(Contributed by Oakland Pioneers - No. 42)

Hello, boys! Do you remember Briggs' watermelon patch at Fifth and Adeline? How we would make a raid on it after a swim in Hardy's Creek and how good the melons would taste, eating them in the little old depot which stood in the middle of the street at Adeline station? And how big his shotgun did look! - but nevertheless, or no gun, we got the melons just the same. Ask Elon Warner about it.

How about Sally Hart 1 2 3 4 5, whose weight was about 90 pounds? And if there ever was a redheaded girl, she sure was one: about four feet-seven inches high and used to spout and talk to beat the band. She was out for Local Option, and her hall was a large tent on the west side of Broadway, between 13th and 14th streets. Well, she won out on election, and then they put up the Sally Hart fountain at Telegraph and San Pablo avenues in honor of her winning the campaign. And now, what became of the fountain? May be, Henry Maloon knows, as he kept cases on most everything that happened in town in those days. How about it, Henry? 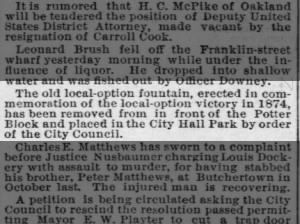 Now then, for some of the street fakirs. One time the Wizard Oil troupe had a large wagon with a parlor organ and gave quite a show. Here are the names of a few songs which they sang:

"The Raffle for That Stove," "When will the New City Hall in S.F. Be Done?" and "Subscriptions for Grant Will Be Out of Date in 1901."

St. Jacob's Oil gave one of the big shows, and that oil was the only oil in the world, to hear them tell about it. Well, then. there was Buffalo Bill, in person, with his bunch of Indian scouts selling cure-all, with their famous Vigor of Life, an Indian herb medicine: and every now and then the scouts would give a war whoop that one could hear for blocks away. That did the trick, and then they would pass out the vigor of Life for "Only $1 Per Bottle."

Perhaps that is why we have so many Pioneers remaining with us today. Am I right? Or, did they let well enough alone?

Text on my list of fakirs is Dr. Willey, with his own "Rattlesnake Oil"; and say, what that oil would not do was a caution, according to his story. And while he would be selling the oil, he would be doing sleight-of-hand tricks. And how he could dress! - plug hat, diamonds and everything that goes with them. 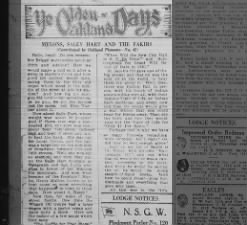