One of our Oakland pioneers, William ("Billy") Blote, tells some incidents of early days, as follows:

"In early days, including the early '60s, the Agricultural Pavilion stood in the center of the block now occupied by the Court House. It was the only place in town large enough for a show or a dance; so, whenever there was anything doing, the whole town was there. You could see them coming, some with the old-time four-cornered tin lanterns burning candles inside. As for streets, it was go-as-you-please; the thing was to get there. There was one show which came often; this was the Glass Blowers. They could, animals and ships, and were the source of great wonder and admiration by us boys.

In front of the Pavilion was a flag pole, perhaps fifty feet high. Once, when the halyards broke, the town officials offered $5 to anyone who would put in a new rope. A sailor boy came along, tried, got half way up and came down, saying it was too much of a job for the money. One of the town boys came along and, inquiring 'What's up?' learned of the sailor's failure and asked who offered the money.

"'Now, you just watch me get that money,' said he; and pulling off his hat, coat and shoes, hung the rope around his waist and, with the pole rocking and swaying, put the rope in place and came down. Will Kogel was his name; and the boys hunted up Capt. Brown, and saw the $5 in the hands of Will. His sudden financial prosperity started him to 'buy out the town' for the bunch. There being no ice cream parlors or candy stores, the 'bust' was limited to blowing in most of the 'fiver' on such juvenile luxuries as peanut sticks, jujube paste, lozenges and bottle soda." 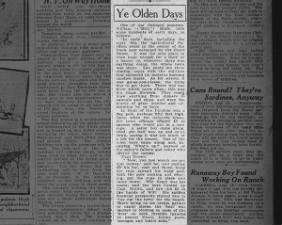