In 1820, one Luis Maria Peralta, then a Mexican soldier at the Presidio of San Francisco for over thirty years, was granted by his government, "on account of distinguished and meritorious services," a tract of land extending from San Leandro Creek to what is now the northern boundary of Alameda county. It was then and for many years after inhabited only by Mexicans and Indians. In 1842 Peralta divided this San Antonio grant among his sons, and the portion comprising the business part of Oakland was given to his son, Vicente, and East Oakland to Antonio. The Vicente Peralta homestead comprised a large square tract of land, including what is now Idora Park. Ancient Indian mounds, composed mainly of oyster shells, were found at West Berkeley and Alameda, with similar ones scattered elsewhere.

San Pablo was flourishing submission, and San Antonio, a small central portion of what is now East Oakland, was a town long before there was a single white settler in Oakland. At San Antonio there was an embarcadero or wharf, from which lumber was shipped from the Redwood forests, as well as hides and horns collected from the adjoining country.

The first Oakland settler in what is now the city of Oakland was Moses Chase, father of the late George Chase, who pitched his tent at what is now the foot of Broadway in the winter of 1849-50 and commenced hunting. He was found here by the Patten Bros. when they arrived in the spring of the following year. In the summer of the same year came the historic trio, Carpentier, Moon and Adams, who took possession of the land, claiming that it belonged to the United States Government, not to Peralta, and erected a cabin near the foot of Broadway. The incorporation of the city by these men, the obtaining of the waterfront by them, and their various contests relating thereto and with the Peraltas are long since well-known matters of history.

The Oakland Pioneers are to hold their next regular meeting next Friday evening at the city hall. 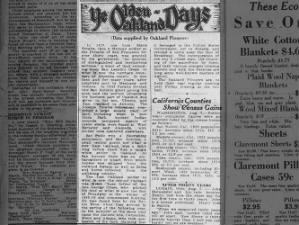