(Contributed by Oakland Pioneers - No. 51)

THE CREEK ROUTE IN EARLY DAYS (NO. 2)

The Contra Costa hills, with old Grizzly Peak, loom in the distance as does Redwood Peak with its forest of native timber, its slopes covered with a carpet of green interspersed with deep canyons emptying their waters into the bay, and as far as the eye could reach there was not the sight of a single habitation to mar the beauty of those hills.

It has been said that General Fremont, standing upon the slope of the Contra Costa range for the first time, and looking down upon the Contra Costa Valley beneath him, with its flowing streams, and beds of wild flowers, the thousands of wild Spanish cattle grazing on the plains and the forests of oaks which covered the sites of Oakland and Alameda of today, the bay or San Francisco with its islands and the Golden Gate in the distance, exclaimed: "This surely is God's Country!"

We are now opposite the sand dunes where the Peralta slips now are and still the only sign or habitation is a small house on a point of land called Graffelman's Point, where the machine shops of the Southern Pacific were afterwards located. We now round the point of land and still no sign of Oakland.

To the north a vast marsh spreads interspersed with narrow and deep creeks, in the background a vast forest of oak timber extending from the bay shore on the west to the Embarcadero of San Antonio. On the east we get a glimpse of a settler's cabin through the openings of the timber, and for the first time we look upon a real habitation, the farm house of Lowell J. Hardy, situated near the bank of a creek. This creek, called Hardy's creek, had its outlet near where the Howard coal bunkers now are and was then used by all vessels as far up as Seventh and Adeline streets, charcoal and wood being shipped from this place known as the Brigg ranch.

Part of the lumber used in the construction of the house on the present De Fremery Park, was landed at that spot.

To the south was another vast spread of marsh, with high sand dunes where the electric car house is, and in the distance the Encinal de Alameda, covered with a forest of oak timber with no sign of civilization.

We are now approaching the town. Here and there a small house appears on the border of the slough; and as we look ahead, we see a long line of fences extending out in the water about 200 feet from shore: these are the oyster beds of Potter and Gibson, and the Wynant Bros., with a small shack on the edge of the marsh. Still further on a small wharf projects into the stream about 75 feet from shore with a mixed population of whites, Spaniards and Mexicans standing to welcome the steamer as she draws alongside.

The bell in the engine room strikes one, the lines are thrown ashore to Clark Watson to make fast, the gang plank is hauled ashore, and the passengers walk on to the wharf at the foot of Main street, now Broadway, Oakland. 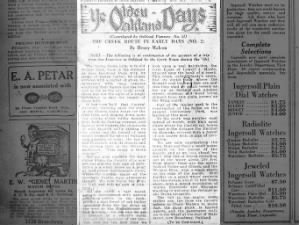