Say, boys! Do you remember the games we used to play in the good old school days - One Old Cat, Two Old Cats, Rounders, Three In and Nine Out, Sokers, N***** Baby, Duck on the Rock, Tree Tag, Pug, Cincinnati, Boston Leap-frog, Skin the Cat, Shinney, Spanney Over, Mumbley Peg, Knock-up. Pass one of the schools today and you will see that the boys of the present time do not play any of those sames. Gee, how I would like to just once more get some of the old school boys and again play these games and show the boys of the present day what fun we used to have when we went to school! I think they would sit up and take notice.

And the tricks we would play in school! Who put shoemakers' wax on the bench, mucilage in the teacher's inkwell, tacks or bent pins on the seat, acacia seeds on the stove, let mice run in schoolroom, played tick-tack and beanblower, mixed the lunches in the hat room? How did the snake get Into Joe Green's lunch bucket, or the toad in the bucket of drinking water? And how about the boy that shined his father's boot with stove polish on the night his father was going to the Odd Fellows' ball?

Then there was the big oak tree at the northwest corner of Broadway and Eighth street and a wooden awning across the street. Sometimes at night we would take a thick black thread, make it fast to the corner post of the awning, run the thread across the street, get it into the tree with the end of the thread and leave it slack until some man came along, then just pull in the slack and catch the edge of his hat, when off it would come to the man's great surprise and our great delight.

Then there was driving sticks into the wooden sidewalk where men passing at night would stumble and do a lot of swearing, to our further delight.

Take it all in all, these were the happiest days of my life. Enough said this time. 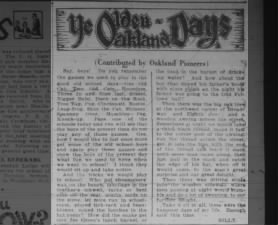