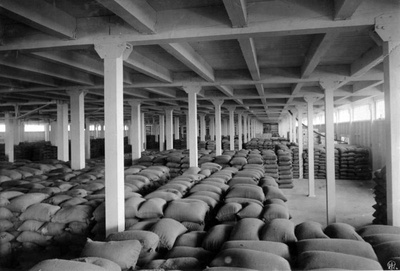 Partial interior view of Albers Bros. Oakland, California warehouse, ca. 1918. The 14 acres of floor space provided the largest grain-handling plant in California, with a private fleet of barges and vessels. The bay was on one side of the warehouse and rail on the other.
(Image and caption courtesy of the Oakland History Room, Oakland Public Library.)

The Albers Brothers Milling Company was a large grain operation on the Oakland, California waterfront, which was just one of several locations of the enterprise. Brothers Bernard Albers and Henry Albers began the Portland, Oregon milling business in 1895, and in 1901 incorporated the business. The large Oakland location on the waterfront was opened in 1918.

The Albers Bros. Milling Co. was created in 1895 by Bernard Albers and his four brothers. The company expanded from Portland to the Seattle area, and by 1920, there were Albers mills not only in five U.S. states, but also in Japan, Chile, and Manchuria. The business was purchased by the Carnation Milk Products Company in 1929. This company was in turn purchased by Nestlé, and products with the Albers label are still available today. Edwin Carter engineered the Albers Bros. Milling and Storage Co. addition to their Oakland, California, plant in 1940. 1

On September 17, 1957 there was a major explosion which gutted the sixth floor and blew the roof off the building. Eighteen workers were seriously and/or critically injured, with some employees "hurled from the building" during the blast. Debris was scattered along the Southern Pacific railway tracks for hundreds of feet. 2 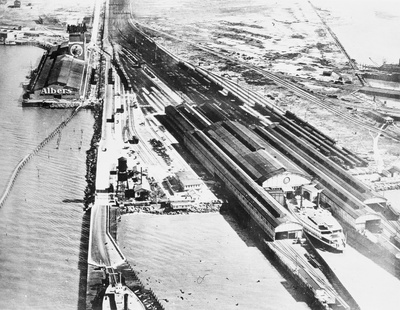 Note that the shoreline has changed since the days of the mill. The location shown on the map above is approximate, but used to have the railroad tracks on one side and the water on the other as shown in the post 1919 photo.

“When I was 13 in 1926, our next door neighbor was a Mr. Kellener, General Manager of Albers Brothers Mill at the end of 7th St. in Oakland. He did not have a son and sort of “adopted” me. He loved baseball and, during the summer months on Saturday afternoon, would take me, on occasion, to see the Oaks play in Emeryville. The summer of ‘26 he offered me a full time job at the Mill for the summer months. I could hardly turn it down.

For the next four summers I had a good job with Albers Bros. The second summer he had one of the men teach me to drive - age 14 - a Model T Ford. Yes, the kind you had to crank and make sure that it didn’t backfire or it would break your arm. When I felt comfortable driving, I was given the job of “Salesman-Collector” covering all of the“Mom & Pop” corner-grocery stores in the East Bay. I would collect bills due and take orders for replenishment of Albers Bros. food stuffs. And since the mill was closed on Saturday afternoons, it didn’t interfere with our baseball games.”
— William Claire “Bill” Meyer (1913 - 2002)