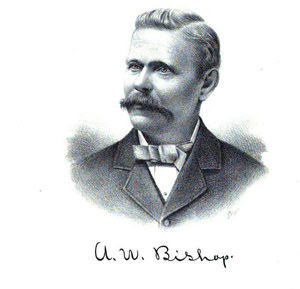 A.W. Bishop 2Amasa Wright Bishop (1832- 1910) was an early member of the Oakland City Council. He was a member in 1887 and 1888, and a Republican.1 Bishop was also appointed to City Council in 1901 by Mayor Barstow when James Simile was disqualified for having been registered to vote for less than three years.4

Wright was born in Vermont and came to California in 1859. He was involved in mining and writing at various newspapers, but was educated as a lawyer.

Wright served as the Tehama County Deputy District Attourney in 1860 (an appointed position) and helped change that county from a Democratic county to be more balanced Republican- people voted for Lincoln- through the influence of his paper, the Semi-Weekly Independent. In 1861 he was nominated for District Attorney, and in 1862 the entire county voted Republican, allegedly through Bishop's hard work.  In 1863, Bishop was chosen Assistant Secretary of the Senate. Bishop sold the paper in 1865 to concentrate on the law and to work for the IRS.

Later in 1865 he moved to Chico and started a paper, the Weekly Courant, there. In 1869 he sold again and moved to Oakland, where he started the Masonic Mirror which he worked at for four years before purchasing the Daily Transcript, which was a Republican newspaper. He sold it in 1876. He wrote a "California romance" called Kentuck.

Bishop during his second stint on council in 19015From 1877-1880 he served as the Superintendent of Bonded Warehouses at the port of San Francisco (appointed Position).

In 1880 and 1882 Bishop was elected City Justice of the Peace in Oakland. 2 In 1890, Bishop was appointed Postmaster of Oakland by the president of the United States. 3

Bishop was married to Ellen Reed.

Bishop died in 1910 and is buried in Oak Hill Cemetery in Red Bluff, CA (Tehama County).