There is a shrine with Buddha and Bodhisattva statues in the Clinton neighborhood on the intersection of East 19th St. and 11th Ave. on the sidewalk that closes the street to through-traffic. It now has a sign, Phap Duyên Tu.

The statue was first placed in 2009 by area resident Dan Stevenson who hoped that "his small gesture would bring tranquillity to a neighborhood marred by crime". Apparently it did, as crime in the area is down 82% since people began showing up for morning prayers in 2012. 1This KALW article provides a really good background - incuding the role of Vina Vo, the person who started maintaining it as a shrine after Stevenson installed it.

Sometimes there are fresh fruits and crackers left in front of the shrine. The shrine is maintained and used by many different residents in the neighborhood, many of whom are immigrants. Every Saturday morning the shrine is cleaned and new offerings are provided. In the morning, you can often hear music coming from a small boom-box inside the shrine.

This shrine is just a couple blocks away from the Quan Am Tu shrine on 20th and 12th. 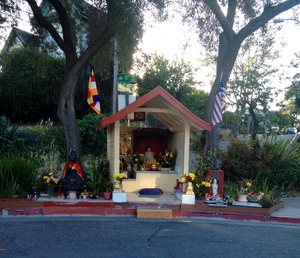 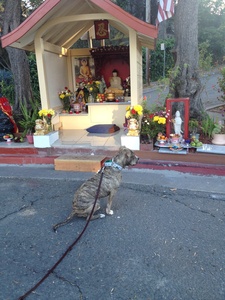 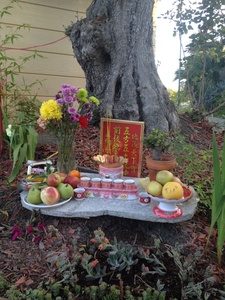