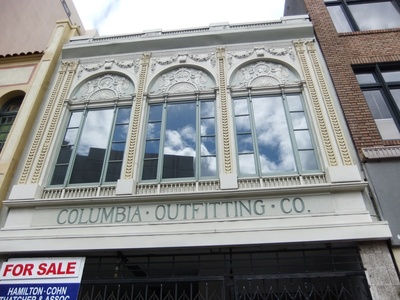 The Columbia Outfitting Company Building is at 1635 Telegraph.

The Columbia Outfitting Company Building, located at 1635 Telegraph Avenue, Oakland, California, is an example of a Beaux Arts derivative which was remodeled into a mid-20th century store building. Architects Mel Schwartz; John B. Anthony (unsure as to which was the original architect in 1922 and which was responsible for the remodeling in 1951 & 1965). The builder was Cress & Troback.

This is a two story and basement reinforced concrete building on an interior lot. The original three bay facade with elaborate cast concrete frieze and cornice had been entirely covered with flat white stucco panels. These were removed and the facade restored as part of the city's historic facade restoration program. The shopfront area is recessed, with green terrazzo pavement and overhanging polygonal show windows (1951).

This historic building is #31 on the list of District Contributors/Non-contributors for the Downtown Oakland Historic District Registration Form. The Columbia Outfitting Company Building was a non-contributor due to the remodeling. 1 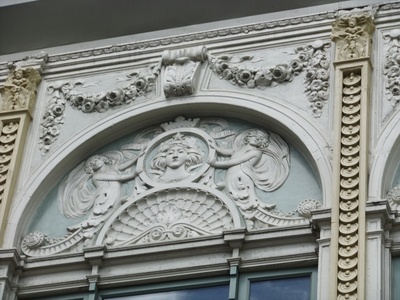