George Marion Johnson 1 (May 22, 1900 – August 11, 1987) was a tax attorney, Dean of Howard University Law School, member of the Civil Rights Commission. He received an A. B. in anthropology and L. L. D. in Law from the University of California, Berkeley. 2 He was a founding member of the Alpha Pi Alpha fraternity, and a member of the Epsilon chapter. 3 He was born in New Mexico, raised in San Bernardino, CA and lived in Berkeley, CA for extended periods of time while pursuing two degrees from UC Berkeley. "He is a native son, his grandparents having crossed the plains into California during pioneer days, locating In San Bernardino, where his parents still live." 4

In 1932 he gave a lecture on "The Cultural Advancement of the American Negro." He was described as a "Negro attorney of Berkeley." 5

In a 1935 edition of The Sphinx, official publication of the Alpha Phi Alpha fraternity:

Brother George M. Johnson, as a member of the Bureau of Tax Research of the State Board of Equalization, is demonstrating his capacities for constructive jurisprudence, helping to draft the State's tax measures. With offices in Boalt Hall, University of California Law School, he is at the same time preparing a doctor's thesis on a phase of Federal Taxation, that most promising of fields of potential pecuniary reward. 6

In the March 1, 1936, edition of Activities Among Negroes, he is mentioned in this piece:

Attorney George M. Johnson, graduate of the University of California Law School, and in 1930, recipient of the Sheffield-Sanborn scholarship for post graduate study in jurisprudence, has published an article which appears in the California Law Review, "State Sales Taxes and the Commerce Clause." ... Attorney Johnson is Assistant Tax Counsel to the California State Board of Equalization. 7

In the 1940 census he is reported to live at 1379 Berkeley Way, Berkeley and his occupation was "Legal Counselor" for the State Board of Equalization. He was married to Kathryn Johnson, born about 1915 in Kentucky. 8 He later married Evelyn, and became stepfather to Rick Shamwell. 9

In 1943 he was appointed Assistant Committee Chairman of a new, regional office of the Fair Employment Practices Committee, in San Francisco. The committee held hearings to '...investigate charges of employment discrimination against Negroes by railroad companies and unions.' 10

In 1946 he becomes dean of Howard University Law School. 11

In 1959 he was nominated to the Civil Rights Commission: 12

Johnson was named to fill a vacancy created by the death of J. Ernest Wilkins Jan. 19.

Five of the nine subcommittee members voted, all casting their ballots for Johnson. The other four were not present.

The nominations still must be approved by the full Senate Judiciary Committee.

Chairman Thomas C. Hennings (D Mo.) said he will ask the full committee for early action on the nomination so Johnson can participate in commission hearings in Chicago set for early May.

The subcommittee vote came at a closed meeting following a brief public hearing.

Gordon M. Tiffany, staff director of the Civil Rights Commission, said Johnson's "rare" talent would be "particularly helpful in the "explosive field in which we work daily."

There was no opposition witnesses.

Johnson, a member of the California Bar and the bar of the Supreme Court of the United States, has served in several state and federal capacities. He was deputy chairman of the President's Committee on Fair Employment Practices in 1943-45 and was senior assistant tax counsel of the California Board of Equalization from 1933-40.

The commission post pays $50 a day for active service.

His nomination was approved by the Senate: 13

Johnson, a Berkeley, Calif., attorney and former dean of the Howard University law school here, was nominated by President Eisenhower to succeed the late J. Ernest Wilkins. Wilkins was the first Negro to serve as an assistant secretary of labor, a post be held from 1954 to 1958.

The committee's chairman, Sen. James O. Eastland (D-Miss), announced the vote at a closed-door meeting of the committee was 5-3 in favor of the nomination. He said the roll was left open to permit other members of the 15 member committee to record their votes. Eastland said the roll call would be announced.

Johnson, a Republican, has been chief of the Civil Rights Commission's division laws, plans and research. 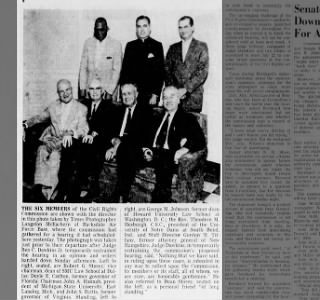 He went Brazil under the auspices of the Rockefeller Foundation to research 'the role of law in race relations in western civilization.' 15

He later went to the Howard University Law School, arriving on the campus with 68 cents in his pockets, wearing a $1.15 suit given him by the Union Mission, in Parkersburg, W. Va. He had been arrested there while hoboing a train to get to Howard. HIS FIRST TUITION to Howard - a fine investment - was paid by Howard Finkelstein, a white Arizona lawyer. As Mr. Holt puts it: "For three years, Howard University clothed, fed and educated me." He tells how former Dean George M. Johnson - now on the Civil Rights Commission - gave him a suit of clothes. He wound up with a fellowship scholarship and was graduated in the class of 1956. He calls the Howard University law school "the greatest law school In the world," with Its entire faculty and student body mobilized to one thing, winning civil rights cases. He Is trying now to carry on that tradition and doing a fine Job of it.