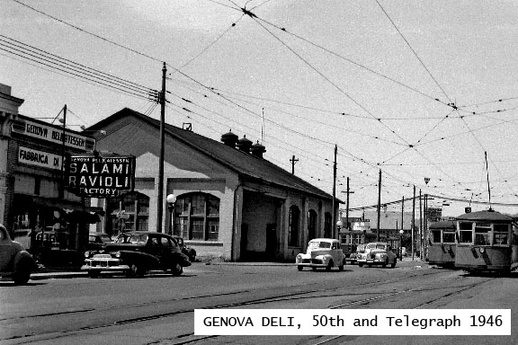 Italian Americans thrived in the East Bay from the 1890s to the 1960s, particularly in Oakland’s “Little Italy” in the Temescal neighborhood.

Major Italian immigration to the United States got underway in the late 19th century and would last through 1910. More than two million Italians left Italy, primarily the northern regions, for America. Today, about 1.5 million of their descendants live in California alone.2

Oakland, the other city by the bay, was a magnet for Italian immigrants in the early decades of the 20th century. Some relocated from San Francisco after the devastating 1906 earthquake and fire; many more came to Oakland predominantly from Italy’s northern regions of Piedmont, Liguria, and Lombardy in search of opportunity and prosperity. 3

Many newcomers settled in the Temescal neighborhood of North Oakland which “offered sunshine and soil for fruit and vegetable gardens; elbow room and affordable housing; easy street car access; and most vitally, job opportunities.”2

The East Bay economy in that era provided opportunity for many such jobs including those in the garment trade, window washing and janitorial services, laundry work, seasonal food canning, the burgeoning automobile service industry as well as the fading livery stable business, work in restaurants and food markets, truck farming, and construction.

Sometimes the job opportunities became quite selectively regional. For a time, one had to be from the Genoa region to have a decent chance of getting a job in the Oakland scavenger industry. 2

Sometimes the discrimination encountered by Italian immigrants in employment was re-directed at other groups. One photograph of an Oakland market shows a sign reading “This market does not sell any meats purchased or handled by Chinese or Asiatics. We believe in America for Americans.” Ironically, at times Italian Americans themselves were not considered white by Anglo Saxon society.2

Food was at the center of many Italian-American enterprises. “Delicatessens, produce shops, and retail food import shops owned by Italian Americans were (and still are) a common sight in East Bay streets.” A number of successful Italian owned bakeries were started, although they were often called “French-Italian” in an effort to attract non-Italian customers. 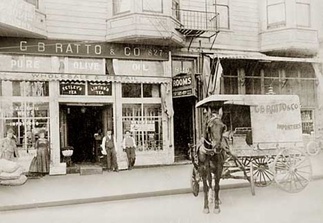 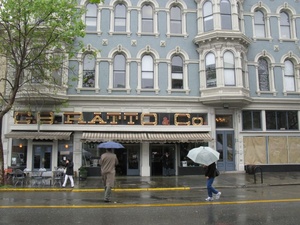 Oakland’s Rivoli Deli, G.B. Ratto & Company, Genova Deli, the Toscana and Colombo Bakeries, Lucca’s Deli and Bertola’s restaurant formerly at the corner of Telegraph and Shattuck were just a few of the Italian American businesses that prospered in the area. 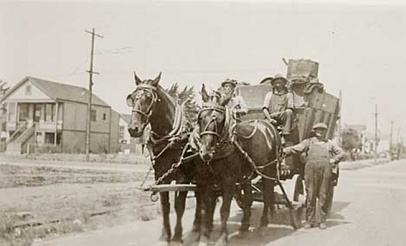 Before municipal garbage collection, Italian immigrants developed private routes, collecting garbage from East Bay homes and businesses — “a horse, a wagon, a strong back, and you were in business.” Operations were consolidated by 1920 into one major scavenger company, headquartered in Temescal, whose blue painted vehicles—often called “blue taxis” or “honey wagons” — roamed East Bay streets. 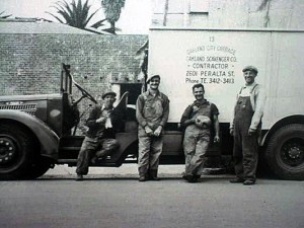 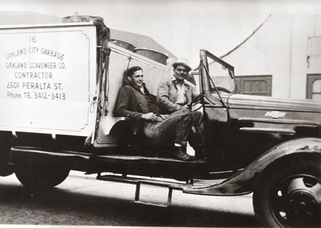 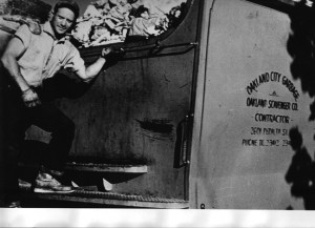 The company followed meticulous recycling practices nearly a century ago. In addition to separation of glass and metals, food scraps were sold as hog feed, buttons were cut off old clothes and re-sold to laundries and tailors, scrap cloth and old clothes went as rags to auto repair shops and janitorial businesses, and newspapers and cardboard were recycled at local paper mills.

The construction industry also provided employment as “countless Italian American craftsmen took their Old World construction skills and applied them to the needs of their newly adopted country.” Some started out as laborers and later organized their own contracting firms.2

“Providing labor for roadways was a major source of employment,” as was quarry and mason work. Skilled Italian-American artisans worked on the massive stone buildings of the UC Berkeley, campus.

Two big local quarries, the Bilger Quarry, “la Cava,” in Oakland and the Hutchinson Quarry, “la Cava di Berkeley” at the top of Schmidt Lane in what is now El Cerrito, employed large numbers of Italian immigrant men who often lived on site in boarding houses.

The Bilger Quarry is still visible from the Rockridge Long’s Drugs/Safeway complex, so the next time you shop there, recall the hundreds of Italian American men — many from the regions of Piemonte and Liguria—who labored there in the Bilger works for two dollars a day and slowly reshaped the southern end of the aptly named Rockridge district.2