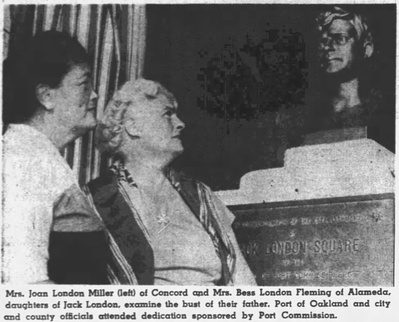 The Jack London bust was a bronze statue in front of the Old Spaghetti Factory in the Haslett Warehouse building in Jack London Square. It was dedicated November 17, 1954. 1 Jack London's daughters Joan and Bess attended the dedication ceremony. 3

The bust was removed sometime in the 1990s during renovations, and is presumed to be in storage, but its whereabouts are unknown.

The bust was based on a sculpture by Finn Haakon Frolich (also Frohlich or Froelich), who was a friend of Jack London.

Frolich created the original plaster casting about a year before Jack London's death in 1916. In 1917, Charmian London made a gift of a bronze version of the bust to the Pan-Pacific Club in Honolulu. Unfortunately, the bust disappeared while being shipped to Hawai'i. 9 Another copy was to be made, but it's unclear if that was delivered.

In 1918, Frolich started a movement to place a bronze version of the bust in an Oakland park, but that apparently went nowhere. The bust was displayed in the lobby of the T & D Theatre. 8

The years between 1918 and the placing of the bust in Jack London Square in 1954 are less well documented, but the plaster bust made an appearance in 1922. E. W. Chambers, past president of the Martin Eden Club complained to police that author Carlton W. Kendall of the rival Wolf's Head Club had made off with a bronze bust. It had been a gift to the club from Mrs. London and Jack's step-sister, Eliza Shephard. Kendall appeared and responded that he had taken the bust to be repaired. 10 It later came out that it was just a plaster version, and it was being repaired as stated. ("Fight Over London Bust Is Ridiculous, Says Author") 12

A bust, likely the same one, and the mold for it later turned up at the former Blair estate in Piedmont. Those were donated by Trafford Charlton of Oakland to the Port of Oakland, then repaired and the new bust cast in bronze by Lee McCarty of Santa Rosa for the 1954 dedication. 3 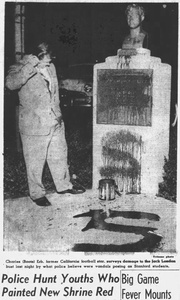 Just days after the dedication, the bust was smeared with red paint, and several red S's were painted nearby. Clearly the pre-Big Game work of Stanford students . . . or was it? Police had doubts, and questioned "Boots" Erb, who ran the nearby Bow and Bell restaurant, and Jack Hendrickson, publicist, about the vandalization. Hendrickson had tipped the newspapers about the impending event, and said he overheard men plotting in Erb's restaurant. Erb said he had received an anonymous phone call with a warning the day before. 5

Based on a partial license plate from Jackie Jensen, another former Cal star who ran the Bow and Bell with Erb, the police narrowed the search. Hendrickson passed a lie-detector test, which police said showed he knew about the stunt ahead of time as he'd indicated, but that he didn't know who did it. 6

Police later charged Erb and Hendrickson with malicious mischief. 7 Erb was fined $250, and said that Hendrickson had come up with the idea as a way to generate publicity for the Erb's restaurant. 11 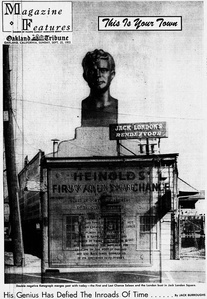