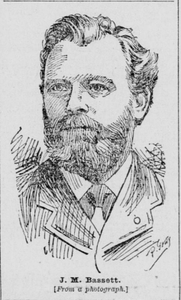 (From a photograph)1James Bassett was know as "Old Pard." Born in Indiana in 1830, he came to California in 1850, arriving in Oakland in 1877. In the 1870s, as a friend of Leland Stanford, and while working at Southern Pacific Railroad, he became frenemies with one Collis P. Huntington of the Big Four. After Stanford's death, Huntington fired him and Bassett started writing letters addressed to Huntington under the name "Old Pard" that were published in papers around the state. These letters caused Huntington to lose money and face, but "Old Pard" kept it up even after his official debts were paid, and even after the former's death. One article suggests that Bassett's entire aim in life was to ruin Huntington and Southern Pacific.14

For awhile Bassett worked with John Davie and together they created a ferry line (the Davie Transportation and Ferry Company) between Oakland and San Francisco that rivaled Southern Pacific's service. Through price gouging, they forced SP out of the ferry business and SP began to concentrate only on the railroad game.

Davie was mayor while Bassett was on the City Council and apparently they were very close.5 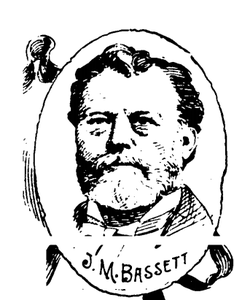 A Smug Bassett post-Election13
Prior to his life as "Old Pard," he rubbed elbows with some future luminaries in the gold fields: Joaquin Miller and Bret Harte. He then spent time in the newspaper industry, at various points working at the Yreka Journal, the Sacramento Bee and the Los Angeles Herald. He also founded the San Francisco Golden Era, which is where Stanford found him. He also worked with the San Francisco Chronicle and the San Francisco Post.6

Bassett may not have had an easy go of it on City Council. From day one, The San Francisco Call predicted "lively times," and they probably won any bets they placed on that one.16 At one point, police had to be called to a City Council meeting to separate Bassett from another Councilman, Walter Manuel.17 Another time, he called his fellow Councilmen "queer in the head" and "pinheads" (this is the same man who sued The Enquirer for libel).18 One contemporary article suggests that he was at odds with almost all of his cohorts: it describes the "strained relations that had existed for the last ten months between the majority of council and himself."7 The issue came about this way: In January of 1896, Bassett was rumored to be going to Washington DC to fight a bill that would fund railroads. If he went, he would have to resign his seat because he would probably be gone for more than 30 days, and the charter specified that Councilmen gone more than 30 days had to be replaced by the Mayor.8 Apparently "Old Pard"'s beef with Southern Pacific was something of a joke, because the Council brought up the following resolution: 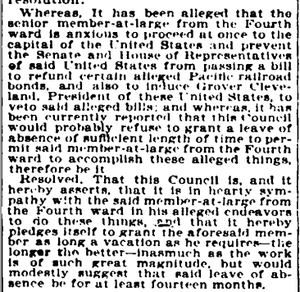 the so-called "Vacation Ordinance.""Whereas, It has been alleged that the senior member-at-large from the Fourth ward is anxious to proceed at once to the capital of the United States and prevent the Senate and House of Representatives of said United States from passing a bill to refund certain alleged Pacific railroad bonds, and also to induce Grover Cleveland, President of these United states, to veto said alleged bills; and whereas, it has been currently reported that this Council would probably refuse to grant a leave of absence of sufficient length of time to permit said member-at-large from the Fourth ward to accomplish these things, therefore be it

Resolved, That this Council is, and it hereby asserts, that is in hearty sympathy with the said member-at-large from the Fourth ward in his alleged endeavors to do these thing, and that it hereby pledges itself to grant the aforesaid member as long a vacation as he requires- the longer the better- inasmuch as the work is of such great magnitude, but would modestly suggest that said leave of absence be for at least fourteen months."

Bassett didn't much like this joke. The ordinance was referred to the Picnic Committee, where it sat.9 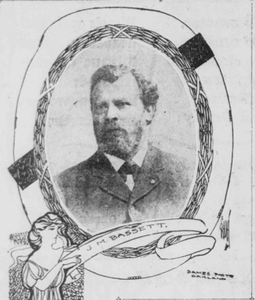 It wasn't just the railroads. Bassett was also involved in the other big thing in Oakland: the water. In 1895 he proposed that Oakland should own its own water supply and provide water at cost to customers.10 He apparently studied this issue at great length and claimed to have letters from 250 cities who owned their own water supply.15 His interest in the waterfront seems to have stemmed from his issues with Huntington: when they parted ways, he told Huntington he'd make him pay on the waterfront. He started writing a history of Oakland's water then, and was about to have it published when someone got wind of it. Attorney Harvey Brown and Edson F Adams seem to have been involved in misplacing this authoritative document.11

It wasn't just the water people and the railroad people and the Council people that Bassett had trouble with: Judge John Ellsworth once punched Bassett in the face when they encountered each other in the street.12

Bassett married twice. His first wife died and he had 4 children with his second wife, Carrie Hazeltine.2 They lived at 725 8th Street or 278 8th Street. Bassett is buried at Mountain View Cemetery.3

Ran for Congress (not elected)