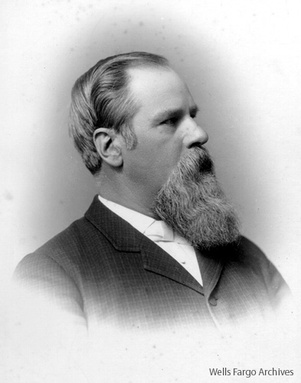 John Joseph Valentine, Sr. (November 12, 1840 – December 21, 1901) was the 1st President of Wells Fargo & Company who was not previously a banker. Valentine worked up the ranks of Wells Fargo as agent, route agent, cashier, General Manager, and Vice President before serving as President from 1892 to his death in 1901.

Valentine had seven children; four from his marriage to Mary George and three with his second wife, Alice B.M. Valentine.

In addition to serving as Vice President of the San Francisco Young Men’s Christian Association, Valentine was an esteemed member of the Advent Episcopal Church of Oakland and on the Vestry since at least 1885. After a new church built at 1540 12th Avenue in Oakland Valentine "challenged members parishioners to eliminate the debt. He offered to match the donations of others up to half the debt total. By that program his desire was achieve; the debt was wiped out." At Valentine's funeral on December 23, 1901 the church was filled to overflowing and a choir of nearly 50 took part. "Outside, the funeral procession included a large Wells Fargo express wagon draped with flowers." California Bishop Nichols spoke of Valentine as the "honored and honest head" of a large corporation who was "Christian in conviction, in conduct" and who had a "warm heart for his fellow man. Though this was the era of "robber barons," it was his delight to say that the profits were distributed to "20,000 persons scattered all over the country, and that many were widows and orphans. Valentine frequently became aware of local disasters at points throughout the nation where Wells Fargo maintained offices. So he often began campaigns for relief funds for the needy throughout the nation. John J. Valentine was reputed to be a compassionate gentleman, so honored at his funeral." In the late 1920's Advent Episcopal Church became St. James the Apostle Episcopal Church, which is still located at the 12th Avenue address. The church contains a phenomenal glass window commemorating his wife Mary F. Valentine and two of their children who died at 2 1/2 years old and 10 months old. 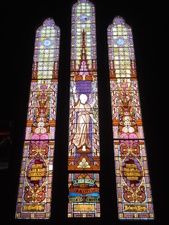 Standing against the mining industry in 1892, John J. Valentine was the only one from a major corporation who refused to support federal lobbying efforts to resurrect hydraulic mining. He also took a stand against what he called US imperialism. Upset over the US refusal to give up the Philippines, he publicly supported W. J. Bryan, suffered a breakdown after McKinley’s reelection, developed acute heart trouble and died not long after. 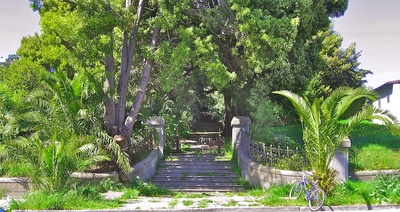 Mar. 2013 photo of the 13th Ave. (south) side entrance. There were also entrances on E. 20th, and on 12th; the main entry likely faced east – in mid-block today (photo courtesy Mike)

The Valentine family lived in the Clinton neighborhood (across the street from the Ellen Kenna Home), on a grand estate they called Cedar Croft. Due to the Victorian mansion’s positioning smack in the middle of the block, this estate appears to have originally occupied the greater portion (if not the whole) of the block bounded by 12th and 13th Avenues and E. 20th and E. 21st Streets. Today, due to the many cars and doorbells in evidence on the property, the mansion appears to be some sort of group home. It is ringed by houses and apartments, surrounded by overgrowth, and not easily seen from the street. However, in early 2013 at least one intrepid oaklandwiki editor snuck up to a side door, glanced in (shh! don’t tell), and beheld readily apparent gilded-age opulence merely in construction details such as floors of tile mosaic or two-tone woodwork, Moorish arches, etc.

Sadly, J. J. Valentine’s death appears to have curtailed his family’s time at Cedar Croft: not long after, his widow moved to a “palatial home” in Adams Point. The provenance of the house and its grounds over the next century is so far shrouded in mystery …

Cedar Croft is located at 2015 - 13th Avenue, Oakland, California and is 8,638 sq. ft., with 8 bedrooms and 11 bathrooms on .45 acres. An 1885 construction date seems likely as there is documentation that it was built before Ellen Kenna built her home across the street in 1888. The servant’s entrance is located at 2020 - 12th Avenue. When it last sold, which appears to have been on September 1, 1992, the property sold for only $169,500. Since then it has been used as multi-user apartments, with the occasional “For Rent” advertisement listing. 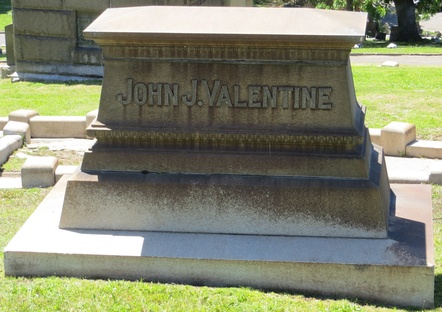